Over a hundred people gathered around the entrance to the new Waitrose in East Cowes at 8:30am this morning. 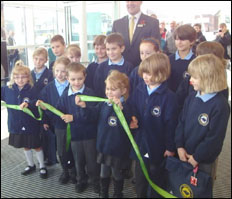 They were hoping to be some of the first to shop in the new supermarket after 14 children from Queensgate Foundation Primary school in East Cowes pulled the ribbon.

Pride From Managing Partners
There was much pride for those working at the new shop from the Managing Partners who came down from Waitrose Head Office. Something, we believe that is very unusual for the opening of a new Waitrose shop.

The reason? It was their first shop not on the Mainland – effectively overseas.

There’s quite a large car park, which by the time we left, was filling – unsurprising on the opening day.

Green credentials
As previously mentioned on VB, the store is being hailed as the first green UK supermarket, being fully powered through an on-site biomass plant.

As well as creating 150 new jobs on the Island, the store will also stock Island produce such as products from The Garlic Farm, The Tomato Stall, Goddards Brewery and The Garlic Farm.

Tom Honeyman-Brown from the Garlic Farm said, “As a smaller producer it’s often hard to get the exposure that larger and better resourced producers can benefit from, but the Waitrose commitment to local producers has helped us to get around this stumbling block.

“We pride ourselves on the quality and consistency of both our products and service, and it’s great to find the same values in a company the size of Waitrose.”

Cutting of the ribbon
Christian Beasley from Virtually Wight was at the launch shooting video of the event.

He managed to achieve the status of being the first person through the tills, telling us he purchased a small bar of dark Puru chocolate in honour of Paloma Vivanco getting fired on The Apprentice”Ž.

Thanks to Christian for sharing his video and photos with VB readers.

Image and video: Â© Used with the kind permission of Virtually Wight

newest oldest most voted
Anon
I am an employee at Waitrose East Cowes, and I assure you we are doing everything possible to make your visit pleasant. If you are not happy with the service provided please do not hesitate to send your feedback to us. We are very eager to please our customers, and will take your say into account, and will try and improve our services according to that. Most… Read more »
Vote Up10Vote Down
Vix
Popped over to have a look today – I was very impressed. Not only is the store a lot larger than I envisaged, with quality specialist meat and bakery counters, but the staff were brilliant. They obviously take great pride in working there. There were big queues for the checkouts on the first day, but they were managed excellently and we were all given complimentary chocolates to… Read more »
Vote Up00Vote Down
Don Smith

A good ten mile round trip for me – Too much petrol.
I can not see how the people, other than the people of Cowes can save anything.

We need an Asda in Newport; that would create some good competition.

Waitrose for Cowes people, thats ok, but why an Asda in Newport…what about the rest of the Island…Newport has enough already, plus it is an awful town, can’t get in it, can’t park, then can’t get out, such a stupid town ! In my opinion it is the worst town on this Island ! It ruins the rest of this lovely Island.

I LOVE Waitrose, its clean, its pleasant and the workers are lovely. What the Island needs is a supermarket in the West Wight. I agree Newport is awful and Asda could have gone elsewhere.

I thouroughly enjoyed my visit and will certainly be going back. The store has such a huge selection of goods and I’m so happy to have fresh fish and meat available on counters. The young girl on the fish counter did a phenomenal display of fish and her customer service was fantastic!

i agree with the other people posting here , but one question how many staff live in east cowes? ,as while i was looking around i did not recognise anyone and i live and work in east cowes

Vote Up00Vote Down
Dee Ferris
I too visited the store yesterday – and I am sure I will be using it again – if only to buy Waitrose’s baby bottom butter excellent for dry adult skin – I have been importing it from North Island since it was first introduced – BUT WHY NO COFFEE SHOP??? – all the other supermarkets – Sainsburys, Tesco, Morrisons have one and if like me you… Read more »
Vote Up00Vote Down
wabbit

I think a coffee shop would have raised a few ojections from local businesses in the town that already provide this service.Waitrose have a good PR imagine to maintain,by not having a coffee shop,Waitrose customers that want refreshments will have venture into East Cowes,thus they are seen to be supporting the local community.

After shopping I wouldnt want to be trailing around East Cowes looking for somewhere to have a drink and a 5 minute sitdown- driving out Waitrose I couldnt see any cafes/bistros etc in the immediate vicinity – but perhaps ‘Wabbit’ knows East Cowes better than me.

The Waitrose traffic goes down York Ave and filters right at fire station.Red Funnel/chain ferry traffic goes straight on.Thats why you did see them going in or out.

Sorry did not see them!!!

Thank you – you obviously know East Cowes – I live Central Rural so dont know the area too well.

Too far away for me..but the people I know that went weren’t that excited….probably teething problems but checkouts where apparently awful

Checkouts were busy but not ‘awful’ – staff managed them very well. It took longer because the customer service by checkout staff was excellent and they had to explain this green counter charity thing to everyone.

I can’t believe they put this Waitrose in East Cowes. Surely it would be far more accessible in one of the major towns. EC gets clogged up enough all ready, with only one road in, and the same road out!

well ryde has tescos. newport has sainsburys and morrisons. shanklin sandown and lake have morrisons. theres a fair sized co-op in west cowes. What was there in east cowes before waitrose turned up?

What about the odd thousand or so East Cowes residents that clog up island roads by driving to Ryde or Newport for a weekly shop!

intentionally blank
we had to put up with Red peril,sorry funel

Vote Up00Vote Down
intentionally blank
urm okay, not sure why thats directed at me. Given red funnel can run ferries on time usually, and give plenty of notice and a sensible explanation when forced to cancel them, I would say that is a bonus for east cowes. Of course the traffic going to the car ferry is another matter, but then any time ive been to catch that ferry the traffic hasnt… Read more »
Vote Up00Vote Down
wabbit

Waitrose could actually thin out the stream of traffic coming off the ferry and going up York Ave.Campers might prefer to stock up and then pitch or IOW residents returning from hols.

I’ll be going after the initial surge, I think. Kudos to them if they haven’t got self-service checkouts.

People who use self service check-outs will eventually do away with staff who work on check-outs, staff will loose their jobs.

It is just a cost cutting exercise. Can the staff and customers not realize this fact? Why should you check and pack the goods that you have already paid over the odds for? Wake up the people of the IoW.

We do not need an Asda in Newport!
Tesco is enough, It’s absolutely huge!!
Asda will be very big too!
This will definately put island businesses out of business.

I remember the days when the largest supermarket was Tesco,Ryde.It even sold clothes!.I purchased a Bra along with my groceries and my brother said,You cant put that in the Freezer Sis!…Things have moved on.Oh Happy Days eh?.