Remember yesterday’s good news about the hope of a brighter future for a run-down hotel in Sandown? There’s a significant up date – it’s now become ‘complicated’ 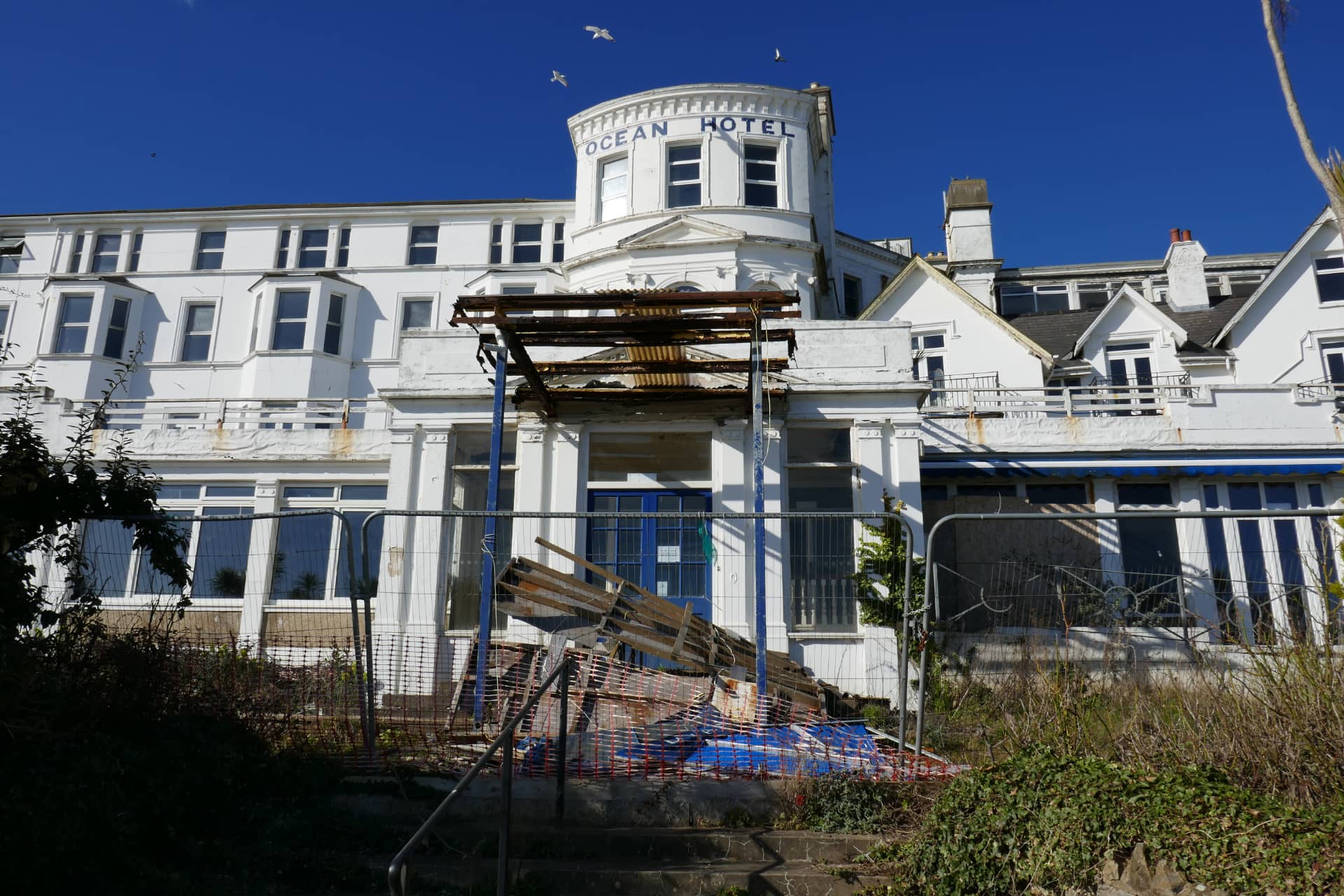 Cllr Ian Ward, the cabinet member at Isle of Wight council for transport and infrastructure, and Sandown South councillor, has issued a retraction to the claims he made on Thursday that the freehold for The Ocean Hotel and King’s House had been sold.

It turns out that the freehold for the derelict site has not been sold – although negotiations are still ongoing, we are told.

News OnTheWight did write to Cllr Ward before publishing our article yesterday, asking for verification that the sale has been completed, but Cllr Ward failed to reply. Even though he has issued this retraction on his Facebook page, and he knew we were writing an article about the sale, he still hasn’t had the good grace to reply.

I am sorry everybody, but my post last night saying that Ocean Hotel had been sold was premature.

However, it was the news I was expecting to receive, but the negotiations are ongoing. To say that I am disappointed and embarrassed is an understatement.

The information I was given had a typo that changed the nature of the message. We have all experienced the computer changing the word you intend to type into something else.

I have received an apology from a senior council officer which is below and I thank him for that.

Hopefully, the sale will be completed soon.

Please accept the local planning authority’s apologies for the wording error that has caused confusion.

This error was due to an auto-correct spell check that changed a single occurrence of the word ‘complicated’ to ‘completed’ within an officers email to the Town Council.

This has subsequently been corrected and confirmed that the sale process is ongoing but not yet completed.

This is a Councillor who doesn’t check facts carefully before speaking. He just repeats what he is told and goes on claiming expenses, costing us lots of money and generally making a mess wherever the goes. Why voters fall for this ineptitude is beyond me. He may be fine at little local issues but when the bigger challenges arrive he drags his knuckles.

Proofreading is the right word here….

Proofreading is what is required here..

Good proof-reading would also have picked up the absence of an apostrophe in “within an officers email to the Town Council. “

Vote Up200Vote Down
Benny C
And as a by product it might have led to actually understanding the Island Roads contract terms, something (there is considerable evidence to suggest) Mr Ward didn’t understand when he committed the Council (and us) to it, as Phil Jordan has previously made clear. And as Ward himself admitted, he doesn’t always read his Council papers before he votes on the content. Why is this man even… Read more »
Vote Up380Vote Down
confidential

Blaming spellcheck rather than lack of care and proofreading isn’t very impressive. Besides, spellcheck doesn’t change complicated to completed anyway.

Vote Up160Vote Down
Guy Eades
The current ‘abandoned’ redevelopment of the Ocean/Kings Hotel was unauthorised in that no planning permission was sought or requested from the developer by the IW Council or Sandown Town Council. As can be seen the building has been pulled apart. However it is at the centre of the Sandown Town Centre Heritage zone 2011 and this was placed on the ‘at risk’ register by Historic England in… Read more »
Vote Up150Vote Down
greenfiremouse

I have of course not had access to the above mentioned Council Officer’s email. However, I cannot imagine that there was no other context to indicate that prosepects of a sale were still rather remote. rather than just the (erroneous) statement that the sale had been “completed”. Is Councillor Ward actually able to read anything going beyond the level of a soundbite?

Vote Up140Vote Down
Bob Blezzard
The best way to get to the bottom of this will be for the original email with the officer’s name redacted to be published. Further narrative should indicate whether the message made sense with the word “completed” being incorrectly substituted for “complicated.” Given that the matter is “complicated” it could reasonably be expected that additional wording would give some indication of the complication(s) which would be inappropriate… Read more »
Vote Up11-2Vote Down
Benny C

Good luck with that. Transparency is a key expectation in terms of public accountability in local government. Past performance suggests that spell check has been at work again within the ‘ Role Requirements’ chapter of the IOW Councillors Ladybird Book of Good Conduct, replacing ‘competency’ with ‘complacency’.

I am sure he won’t make the same mistake again and perhaps all councilors will check what they read a little bit more in the future – ooops sorry forgot they should be doing that anyway as the residents of the Island voted them in to look after this Island.