£1,600 raised for Isle of Wight charities at celebration of ‘Extraordinary Islanders’

The Annual Awards celebrate invention, creativity and skill development and the recognition of creative thought (thinking out of the box) and fighting against the odds of life to achieve extraordinary things on the Island. 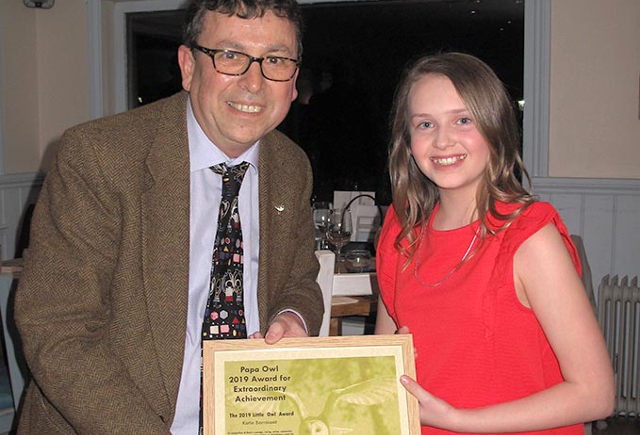 The event was in partnership with Wight Aviation Museum and Isle of Wight Youth Trust. The evening raised over £1,600 which will be divided between these two charities.

The Annual Awards are to celebrate invention, creativity and skill development and the recognition of creative thought (thinking out of the box) and fighting against the odds of life to achieve extraordinary things on the Island.

“This year we decided to use technology and through social media promote the Papa Owl Awards across the Island and ask Island residents who they thought deserved the Awards. We had a number of exceptional nominations and it was very difficult to decide.

“In the Wise Owl Awards we had four exceptional women who in their own ways had ‘Thought Out of the Box’ and these included Carol Court, founder of Ability Dogs, Abby Lines and Vicky Paris who founded Isle of Wight’s Women’s Rugby Team, the Wight Wolves, and Kay Ounsworth who runs IOW Wild Bird Rehabilitation.

“In the Little Owl Award there was a clear front runner, in Katie Barnicoat for her concern for Islanders who are at risk of cardiac arrest in her community. She independently set about raising funds for a defibrillator.”

Lilley: Extra awards
He went on to say,

“This year we also had two other special awards nominated by the Wight Aviation Museum. We awarded Henry Nobbs (pictured below) for his life time promotion of Aviation Heritage on the Isle of Wight and the young people of IW Youth Trust’s Mental Health Taskforce for fighting mental health stigma across the Island.

“All these Islanders are voluntarily and unselfishly helping others. They are the heart of the community. I thank them from the bottom of my heart for what they have done and do. Everything that is celebrated in Papa Owl books!” Both received a cheque to further their charitable work.

Carol has shown great courage, determination, imagination, vision, fortitude, creativity, resourcefulness and social entrepreneurship in founding Ability Dogs on the Isle of Wight. She has inspired many people and established an important charity that links humans with animals to improve lives. She has truly ‘Thought out of the Box’ and deserves much praise.

Carol said on receiving the award,

“I am really moved to get this award. I can talk about Ability Dogs all the time but when it comes to talking about me I find it very difficult. In 2012, I saw the need and started with two puppies and now over 26 young people have dogs. I am overjoyed to see how their lives radically change. Thank you for recognising this work.”

Carol donated her award to the work of Ability Dogs.

Katie lives in Bullen Village (Ryde). Katie is 12 years old and was concerned that there was not a defibrillator. The Award Panel gave the Little Owl Award in recognition of Katie’s courage, caring, action, community spirit, determination, and inspiration in identifying a need for a defibrillator in Bullen Village and then raising the £1,150 needed. Island Roads installed the defibrillator free of charge and also donated towards the cost of its purchase. This will save lives as it will reduce loss of life to 3% due to cardiac arrests in her community. This action deserves much praise and shows with determination what individuals can achieve if they set their mind to it. Katie is now helping other young people to raise funds in their communities across the Island to have defibrillators.

Katie accepted her award with her Mum, Emma, at the Gala Dinner and asked her Award be donated to IW NHS Trust so they can pass it on to another young person raising funds for a defibrillator.

“We were overjoyed to be the venue of the Papa Owl Annual Dinner and Awards. We take great satisfaction in supporting local charities such as Wight Aviation Museum and Isle of Wight Youth Trust.

“We are delighted to have hosted the second year award winners, Carol and Katie, as they are extraordinary people.”

“Wight Aviation Museum will be opening this summer at Sandown Airport and as a new Charity to the Island scene we thank Michael Lilley for raising funds for us and the Isle of Wight Youth Trust at the Papa Owl Annual Dinner and Awards.

“This has raised much-needed funds to start up the Museum. The Award winners are across generations and showed the talent that is in our community.”