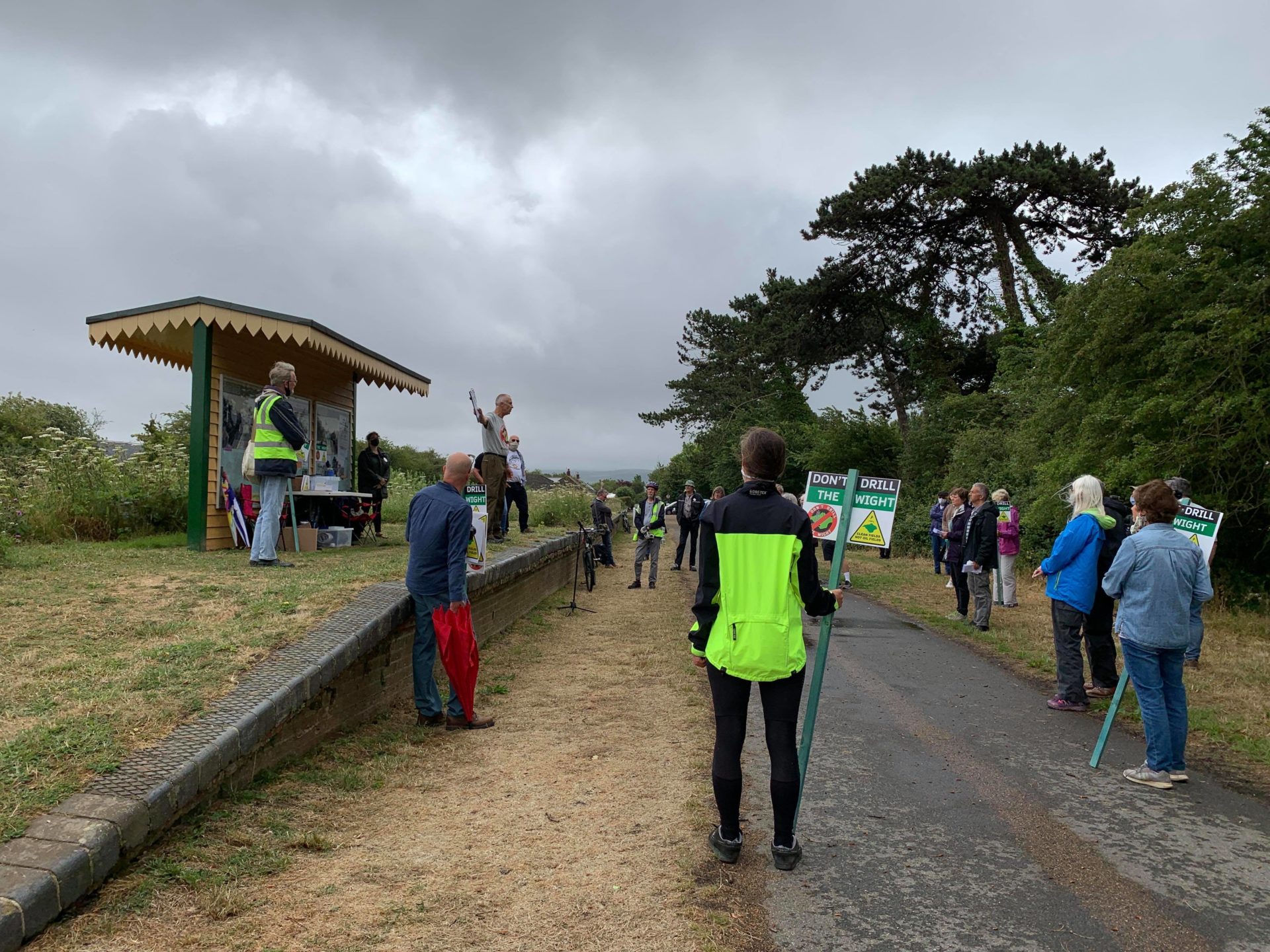 ‘The wrong scheme, in the wrong place, at the wrong time’ — a campaign was launched this weekend to oppose oil drilling on the Isle of Wight.

Don’t Drill the Wight (DDTW) held its first meeting on Saturday in Merstone, just down the cycle path from the potential oil exploration site in Arreton, to get more people involved.

The application from UK Oil and Gas (UKOG) is to create two exploratory boreholes to see if the production of oil in the future is viable.

Comment on proposals
Steve Davis, a spokesperson for DDTW, urged those who care about the issues the application raises or will be affected by the outcome to engage in the process, and comment on the proposals (20/00513/FUL) as it contains ‘elements of damage to the environment and to wildlife’.

Speaking to a socially-distanced crowd of about 50 people, he said the council has to consider a planning application to set up a site for exploration, the first phase in oil production, but warned while this stage may be ‘relatively benign with the least impact’ it was only the beginning and things would get more serious.

Davis: We have to park the emotive, philosophical side
He said:

“The council has to, by law, weigh up material fact. We have to park the emotive, philosophical side of it for now and focus on the planning application. We need hundreds, thousands, of objections so the council oppose this.

“The Island trades on agriculture and tourism, both of which could be adversely impacted by this operation especially if there are pollution issues.

“Locally, we have achieved biosphere status. The council has declared a climate emergency. Nationally we are signed up to the Paris accords. No new combustion engine vehicles can be sold past 2035 and we have seen rapidly changing behaviours recently due to the pandemic.

“It is clear the demand for oil is dropping fast and this will be the trend in coming years. In this background, it doesn’t make sense to be exploring for more fossil fuels.”

The deadline for comments on the application is on 24th July — a year to the day when the Isle of Wight Council declared a climate emergency.

UKOG: Site will benefit the Island
UKOG has previously said the site in Arreton, up the road from the New Barn business park on the A3056, would help benefit the Island, as the company would invest money from the profits of the oil sold back on to the Island.

The company has also said repeatedly it is not, nor will it, frack on the Island.

Quigley: The wrong scheme, in the wrong place, at the wrong time
Attending the meeting, Island Labour representative Richard Quigley said the world is in a new place following the coronavirus pandemic and now is the chance for change.

“I am going to object, but it is about making people aware, it is really the wrong scheme, in the wrong place, at the wrong time and is about nothing more than profit.

“The Isle of Wight has just been designated a biosphere and not too many months later we are talking about drilling for oil, which to me makes no sense.

“I totally understand we need to provide energy but there are so many alternative ways to get it, it seems absolutely ridiculous that we are talking about drilling for oil on our beautiful Island.

“I would like people to object, to spread the message among their friends. It is just not the right thing to do.”

Lowthion: Number one thing is to get maximum amount of objections
Vix Lowthion, spokesperson for the Green Party, said afterwards it was unfortunate the council has proceeded with the application at the time of a pandemic, as it is not helpful for democracy because plans cannot be viewed in person.

“We are having to do what we can. Today is just a meeting, it is not a protest or demonstration, but all the people here are actively engaged and it is a really good start to the campaign.

“The number one thing is to get the maximum amount of objections to this planning application, so it is about visibility and sharing the word, so if you need a garden sign, a leaflet, a poster things for the doors we have got all of that so please get in touch.”

newest oldest most voted
fedupbritain
Many pro-environment campaigns like this will lose credibility every time Vix Lowthion supports them. Her long ties with her former partner who is owns an offshore mining company (licensed, among other things to mine uranium) boasting billions in revenue. Here she is, again, telling us not to damage the environment when God only knows what environmental damage has been done by or still being done by her… Read more »
Vote Up34-21Vote Down
Tamara
I am not saying that I am a fan of Vix Lowthian, fedupbritain, but it isn’t fair to blame her for her ex-partner’s damage to the environment. For all you know, she may have split up with him for this very reason. Have you ever been blamed for the behaviour of someone else in your family over whom you have no influence, someone with whom you have… Read more »
Vote Up22-2Vote Down
fedupbritain
I’d accept gladly if she publicly stated her green-ness was due to her ex’s environment slaying. But she hasn’t. In the past her ex Paul Craggs has been a central figure of support for her and campaigned on the street for her. We are not talking about a minor indiscretion here. His firm is registered in a tax haven, employs 5,500 people, takes in billions of revenue.… Read more »
Vote Up7-15Vote Down
Spartacus

Let’s not digress from the the issue. Ban UKOG that’s the priority.

Let’s come together in solidarity to object to this dirty business and defend our right to clean water, fresh air and protect our environment not destroy it for profit for a few.

I want one of those T shirts.