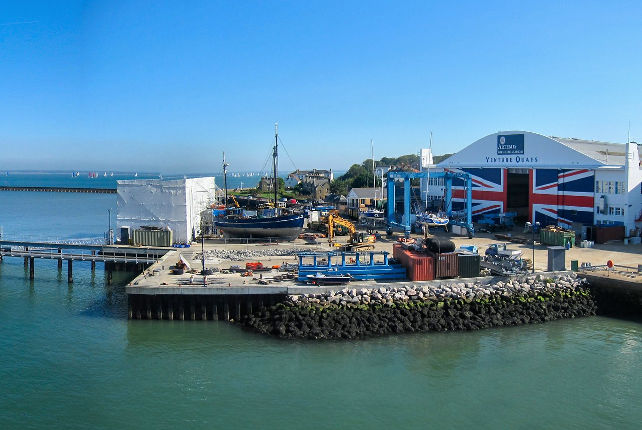 Months of negotiations into buying the Venture Quays site in East Cowes could go down the drain due to Coronavirus.

The Isle of Wight Council has been negotiating with Homes England for the building and land that make up the former Venture Quays site on East Cowes waterfront, hoping to save marine manufacturing jobs, but now a report to Cabinet says this could all be at risk due to the financial position of the council after the pandemic.

£10m funding gap
The £1 million acquisition of the site, which has been the subject of talks with Homes England since July 2019, could be too much for the precarious position of the Isle of Wight Council’s finances, which currently have an estimated funding gap of almost £10 million.

It will be down to the council’s Cabinet next week, on 9th July, to decide whether or not to:

The preferred choice, let the leader of the council, Cllr Dave Stewart, and Cllr Wayne Whittle, cabinet member for regeneration and business development, with advice from the director of finance, make the overall decision to purchase the site.

Homes England has extended the deadline of discussions with the council — but only until the end of the month, 30th July.

Risks laid out in report
In a report from the director of regeneration, Chris Ashman, and Cllr Whittle, the risks of acquiring the site and considerations the council must take are laid out — including the ‘new economic climate’, a potential but ‘likely’ recession lasting one to three years and implementing a delivery strategy.

It says when negotiations concluded in March, the financial impact of the Covid-19 pandemic to the council ‘were beginning to become evident’.

The site had been the subject of significant regeneration plans by Venture Quays, including a marina, hotel and residential development, but following their withdrawal, progress of the original masterplan has relied on improvements proposed by Red Funnel.

In relation to the funding gap, the council is developing a deficit recovery strategy which will allow the council to continue to operate without having to consider spending controls or service reductions.

£1.3m budget
However, the report stresses the importance of ‘reasonable surety’ that buying the site ‘does not place an ongoing financial burden on the council’ and that it is ‘adequately protected’ against financial risk.

The cost of buying the site and essential building works, mainly to the Columbine building, is expected to amount to £1.3 million.

Deliver housing elements within four years
A timeframe has been set by Homes England for the council to implement a delivery strategy for the housing elements of the scheme within four years — planning permission in place by March 2022 and building works to have started by March 2024. If the conditions are not met, Homes England will be able to acquire the sites back for £1.

The report does say it is possible for the council to cover its costs, but if a deeper level of recession arises than is thought, then it predicts the council would make a financial loss.

Despite being a challenge, the council is positive there ‘remain opportunities to investigate’ to turn the housing around — which is thought could cost anywhere between £15 and £20 million to deliver.

You can read the full report below – click on the full screen icon to see larger version.

It’s a great shame the Council spent so much money investing in property on the mainland. I wonder whether it is providing a good return?

Vote Up360Vote Down
Benny C
Many local authorities have been buying assets outside their geographic boundaries that they don’t really seem to understand and perhaps don’t have the skill to own well. When things go well Councillors trumpet. When things start to smell, Councillors transfer all responsibility to officers who are forced to pay experts to help them sort out the mess, leaving very little in the tank to use for our… Read more »
Vote Up270Vote Down
Colin

Sorry, no disrespect to the businesses there. It’s just the council plan I disagree with and the building of more unwanted houses.