Isle of Wight doughnut: Want to find out more? So did ‘The Kitchen Cabinet’ on Radio 4

Did you know that in 1861 the Isle of Wight was described as the ‘Land of Doughnuts’? Hear more about this and other food related facts on BBC Radio 4’s Kitchen Cabinet programme which was recorded on the Island last week. 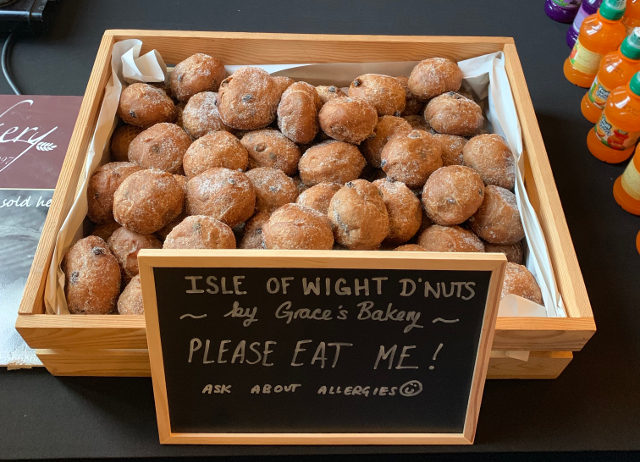 Isle of Wight residents packed into Northwood House last week for the recording of the new series of BBC Radio 4’s The Kitchen Cabinet.

Jay Rayner and the Kitchen Cabinet team are no strangers to the Island. They recorded at Northwood House back in 2014 and this time invited Grace’s Bakery to join them to discuss the origins on the Isle of Wight doughnut.

“We had a great time recording for The Kitchen Cabinet, the panel loved our ‘Isle of Wight Doughnuts’  that we recreated from an 1845 recipe.

“It was really interesting to chat with food historian Polly Russell who told us that it’s quite abnormal for fried desserts to be in British recipe books in the 1800s and believes that the doughnut is likely to be something quite special to the Island. One book from 1861 even called us ‘The Land of Doughnuts’!”

Fallen out of fashion on the Island
Sarah went on to explain,

“Isle of Wight Doughnuts or ‘Bird Nests’ are quite different to Doughnuts that we’re used to. Made with lard, dried fruits and spices they have more of a Christmas Cake taste.

“Sometimes they had plums pushed into the centre rather than piped with Jam. It’s a shame that they fell out of fashion on the Island!”

Tune in or listen again
You can listen to the recording on Saturday 5th October at 10.30am on BBC Radio 4, or listen again on BBC Sounds App or Website.

Grace’s Bakery
Grace’s Bakery have shops in Ryde, Newport, Cowes, Shanklin and Yarmouth. Find out more about their history and offerings by visiting their Website.

1 Comment on "Isle of Wight doughnut: Want to find out more? So did ‘The Kitchen Cabinet’ on Radio 4"

newest oldest most voted
away

Reading your letters about county hall it still should be called land of doughnuts.