The traffic plan is designed to ensure disruption to local traffic is kept to a minimum, although some delays are inevitable with the increased levels of traffic on the roads. Details within. 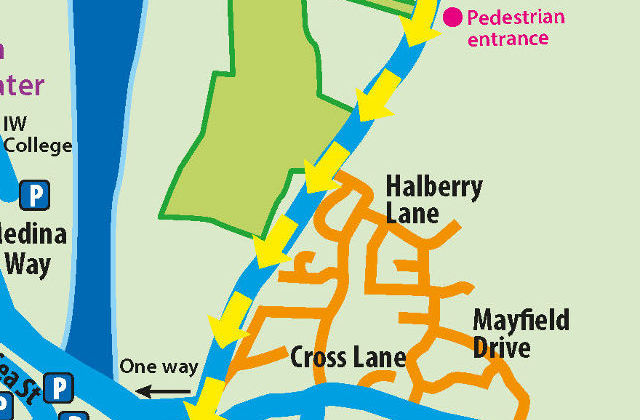 It’s that time of year again as the Island prepares to welcome thousands to the Isle of Wight Festival.

The Isle of Wight Council, Island Roads and Hampshire Constabulary are once again working closely with the organisers of this year’s festival to ensure traffic flows smoothly and disruption is kept to a minimum for the world-famous event.

The plan is designed to ensure disruption to local traffic is kept to a minimum, although some delays are inevitable with the increased levels of traffic on the roads.

Main traffic routes
The main route for festival traffic from the Red Funnel terminal at East Cowes will be up York Avenue and along Whippingham Road where it will turn right onto East Cowes Road and into the festival car park.

Festival-bound vehicles travelling from the Wightlink terminal at Fishbourne will be directed to the right on to Kite Hill, through Wootton, down Lushington Hill and right at the Racecourse roundabout and then left onto East Cowes Road and into the festival car park.

Newport Quay Bridge
The replacement bridge at the Sea Street entrance to Newport Quay will be in place prior to the commencement of the festival. People requiring access to the quay in vehicles will be required to use the bridge and avoid going through Seaclose Park. There will be restricted public access through Seaclose from Wednesday 12 June.

Up to date traffic info
Residents will be kept up to date with routine traffic information, details of road closures and diversions, and updates about those council services affected by the festival. Hampshire Constabulary will provide security and safety updates. Messages will be shared via social media and local media.

The council would like to remind people that the one way system along Fairlee Road, Newport will be put in place from lunchtime on Wednesday 12 June. All outbound traffic from Newport will be directed up Staplers Road.

Ward: A lot of hard work behind the scenes
Councillor Ian Ward, cabinet member for infrastructure and transport, said:

“Once again, on behalf of the council, I would like to welcome festival goers to our beautiful Island. As usual, there has been a lot of hard work behind the scenes to ensure that this year’s festival runs smoothly and has the least amount of disruption for residents.

“Of course, I would highlight that Newport is still open for business throughout the duration of the festival and would encourage members of the public and visitors alike, to continue to support local shops and other businesses during the event.”

Residents meanwhile are encouraged to look at the dedicated festival pages on iwight.com, which contain important information about the road closures and diversions, including access to Seaclose Park and changes to council services, as information becomes available.

Plan route carefully
You can see the traffic plan at and other festival information on the council Website.

The council asks that residents plan their routes carefully to avoid the designated festival traffic routes on the Wednesday, Thursday, Friday and Monday of the event – when traffic volumes will be their highest.

Hi,
All the road diversions are from Cowes to the Festival.
I need to know the route to the Red Funnel from Porchfield with a Motorhome and trailer and I don’t see this on the page.
Cheers
Lance

Vote Up00Vote Down
greatergood
From Porchfield follow the road towards forest road, go along forest Road onto St Mary’s roundabout, round the roundabout take the southbound left hand lane marked for sandown, do not take the slip road off the dual (it will be shut anyway!) follow the dual all the way to coppins Bridge, once on coppins bridge keep left then follow the diversions up along staplers through to Wootton… Read more »
Vote Up2-11Vote Down