Despite strong objections from various quarters, two controversial planning applications were given the go ahead at tonight’s Isle of Wight planning committee meeting. 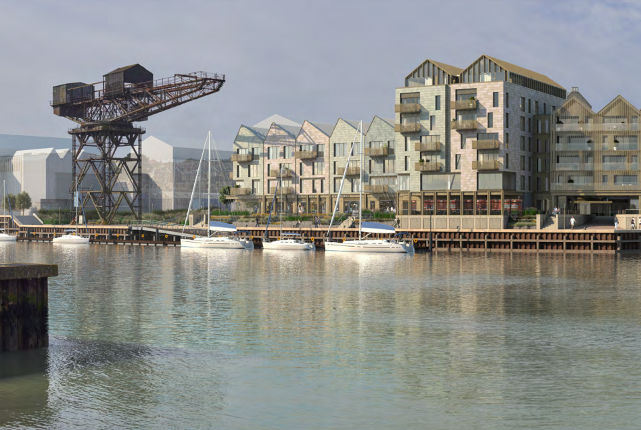 This is an article from the BBC’s LDRS (Local Democracy Reporter Service) scheme, which OnTheWight is taking part in. Ed

Controversial plans to radically reshape Medina Yard, Cowes, and to build a new boarding house and netball courts at Ryde School have been given the green light by the Isle of Wight Council.

Both applications were approved by a vote of seven to five at a meeting of the planning committee tonight (Tuesday).

Strong objections to both applications were raised by residents, councillors and local stakeholders.

Conditional permission
The application for Medina Yard was approved on the condition that phases one and four of the development run parallel to preserve the marine industry at the site.

That means the creation of the marine employment space (phase 4) will have to be given full planning permission before any work can begin at the site.

Concern for GP practices
Speaking on the Medina Yard application, Cllr Paul Fuller said local GP practices may be forced to “pull up the draw bridge” and refuse more patients if the development were to go ahead.

“We are going to get rich, elderly people and we have already heard from the local GP they cannot cope with further patients.”

However, some councillors also spoke in favour of the proposals. Cabinet member for planning and housing, Cllr Barry Abraham, said of the Medina Yard proposal,

“I do not believe we are going to get anything better than this.”

Ryde School
Plans for the Ryde boarding school were also approved, despite objectors saying they were “too high, too bulky and fundamentally wrong for the area”.

Yet another ‘nail in the coffin’ for the Isle Of Wight. It beggars belief that either of these planning applications were given permission. Our hospital is under threat of having services moved to the mainland. Our G.Ps cannot cope. Our roads + infrastructure are appalling. Our schools are failing. Never mind, let’s build even more flats, apartments + houses that Island residents cannot afford.

The Ryde School damaging decision is the lead feature in the latest Private Eye Nooks and Corners section (1470, p.21).

Vote Up00Vote Down
neilwheel
Councillor Abraham “I do not believe we are going to get anything better than this.” NO, not if you don’t appraise the application and amend it to fit the needs of the Island, no you won’t get anything better. Missed opportunity to improve the proposed plans to provide marine industry space alongside housing & shops ( ’cause shops are doing well all over the country!). Next problem… Read more »
Vote Up51-3Vote Down
johnr

With regards to the Medina Yard application.
That will be a few more ‘residents’ complaining about the noise of the Chain Ferry.
Perhaps not as they will probably not live there full time, only be used as a holiday home.

Cool, £500,000 apartment, with stunning views of GKN factory and it’s associated hypersonically loud air conditioning system. What planet are these people on?

The local GP practice has already pulled up the drawbridge – try getting them to answer the phone, let alone give you an appointment!

Megan, do you know who voted which way?﻿

Out of interest, Sally, was it removed by hand or by your software?

The moderator is a human and you have been emailed about it. If in doubt please read the House Rules.

Vote Up9-1Vote Down
boatman
Just wait and see what they propose to do in Ryde – not so much regeneration as wholesale exploitation, think not about the impact on local communities but of the extra Council Tax that will be generated – the people of Cowes, Ryde, Newport and Sandown especially should go out of their way to thank their Conservative Cllrs for their wisdom and foresight in planning matters…….at the… Read more »
Vote Up7-4Vote Down