Not everyone is happy about yesterday’s announcement of the five new trains for Island Line. Roger Berrisford, spokesman for Light Rail Isle of Wight rips into it, labelling it a ‘shameful day’. 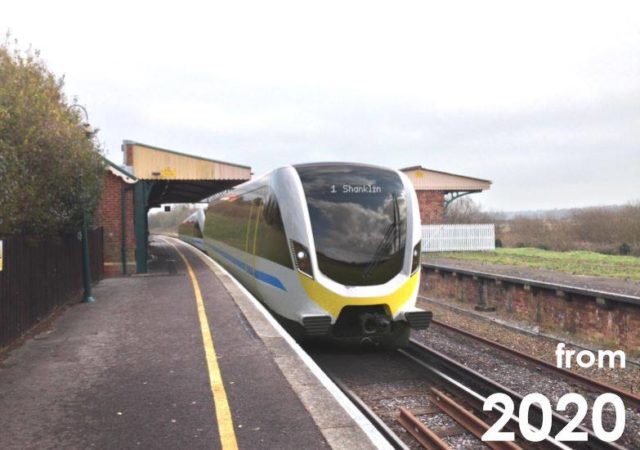 The article below was written by Roger Berrisford of Light Rail Isle of Wight. Ed

But it’s not even funny that the 16th September 2019 has been a shameful day for Island Line as our Government once again will have to eat its words because the current franchisee, South Western Railway, has not delivered the more sustainable solution for Island Line that was specifically requested by the Department for Transport (DfT) Invitation to Tender.

“New trains”
We were told by the Minister of State for Transport that Island Line is to receive 5 ex London Underground (D78) regurgitated trains in the form of Class 484’s from VivaRail. Our MP and Adrian Shooter (Chairman of Viva Rail) said that they were ‘new trains’, which is totally untrue, they are 40 years old and will not help the Isle of Wight Council achieve its regeneration objectives.

It is also abysmal in this day and age that the DfT can see no further than heavy rail, and so another branch line is to continue with the expensive make do and mend policy which we know costs this line more than £3.5m a year instead of a new bright future of light rail with expansion.

Would have saves up to £20m
As much as £20m could have been saved by introducing new light weight trains, the development of which is fully supported by the Office of Road and Rail and the DfT in order to make branch line rail services much more sustainable and are keen to allocate them to branch lines like Island Line.

“It is truly shocking that our MP’s highest aspirations for the Island’s rail service is to support the cheapest option of more second-hand, old London trains when far more sustainable new light trains could be available within a similar timescale and even cheaper. Clearly he doesn’t believe Islanders deserve any better?

“Our proposals would have delivered a 15-minute service using six new light weight trains which could in the future be extended to re-link towns such as Newport and Cowes.

“He appears to have taken his cue from a former Council Leader, now Tory chairman, who has also campaigned for more second hand old regurgitated London trains and it is time for the Islanders to ask why?”

Can’t please some people. We would appear to be getting a complete fleet of updated trains with new interiors plus an upgrade of the line and pier. If that’s what the DfT wants to do instead of closing the line then that seems ok to me. I was under the impression that many carriages are updated on the railways if they are still usable.

I’ve discovered a website that presents the IoW Light Railway alternative to this approach, take a look. Would love to see much more discussion on this before the 1978 tube trains arrive for testing.

Why? It’s way too late, the trains were ordered in August – social media accounts suggest that website was created just a few weeks back.

Vote Up6-5Vote Down
away
The short piece by Roger Berrisford is interesting. What is a light railway. is that the same as the Docklands Light Railway. Could this journal please print the perceived advantages of a light railway. Looking at the headlines about the incredible sulk it looks like we have another prime minister that can be blown over by a puff of wind. So the opportunity to evaluate what is… Read more »
Vote Up28-14Vote Down
neilpalmer400
To call the proposed trains 40 years old is really stretching the truth. Apart from the aluminium bodyshells (corrosion free and an obvious benefit with the salt spray at Ryde) and the bogies (which were replaced near the end of their life on the District Line and are more like 10 years old) the rest of the trains are new. LRIoW talks of their solution being greener,… Read more »
Vote Up140Vote Down
away

Thank you Colin I will read at my leisure this evening.

This is hardly a new idea and it’s been considered time and time again.

Island Line already benefits from it’s own set of (rather basic) standards as the rail regulator doesn’t consider it part of the ‘National Network’ – the traditional arguments in favour of Light Rail conversion don’t apply here.

Anyone see the Observer’s slant on this? Mr Berresford said he couldn’t find the announcment on the Dept. of Transports website. I’ve just looked and nor can I. Does he have a point?

Vote Up15-25Vote Down
Benny C
Absolutely right. We need both – upgraded reliable, cheap, fast and comfortable trains and track for locals when they’re needed to support the island community and old Skool heritage attractions for tourists in off peak periods. Absolutely achievable, unless you’re the unimaginative IOWC or more specifically Cllr Ian Ward, the trouser browsing slightly confused old chap who has failed us on many, many counts over an extended… Read more »
Vote Up21-7Vote Down