Seven more white-tailed eagles released on the Isle of Wight: ‘A landmark for conservation of these spectacular birds’

The Isle of Wight was chosen as the location to reintroduce the white-tailed eagles, as it offers an ideal habitat for these coastal loving birds with plentiful sources of food in the surrounding waters 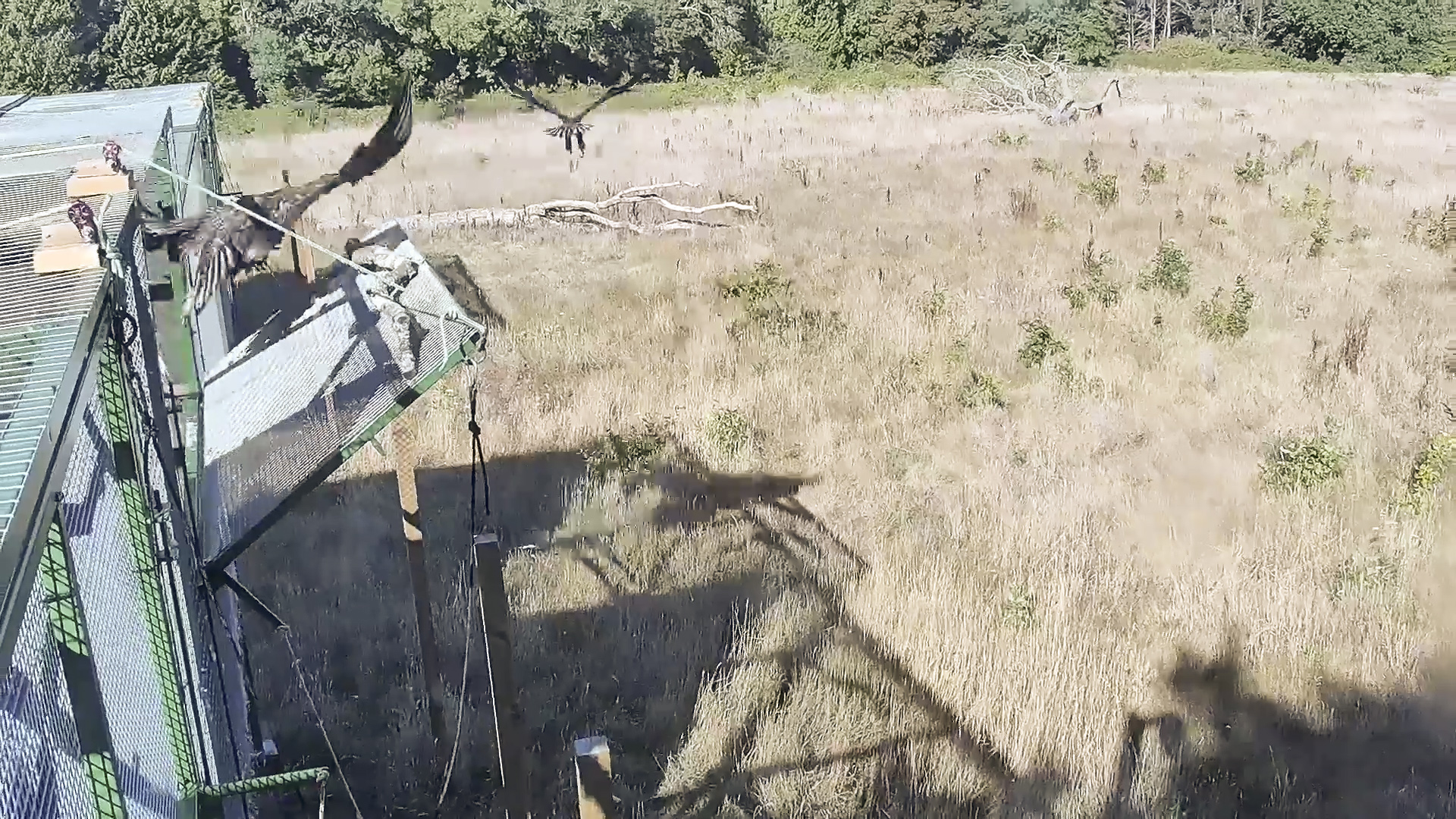 The return of white-tailed eagles to England has reached its next key milestone with the successful release of a further seven birds on the Isle of Wight.

The five-year reintroduction programme now in its second year is led by Forestry England and the Roy Dennis Wildlife Foundation, and aims to restore this lost species after an absence of 240 years.

It will take several years for the young birds to become established and breeding is not expected to start until at least 2024.

40 per cent survival rate
Each bird is fitted with a satellite tracker to enable the team to monitor and track their progress.

Evidence from similar re-introductions suggests that the rate of survival to breeding age is around 40 per cent, and four of the six birds released last year have survived and are doing well.

Explorers
As they mature the released white-tailed eagles have, as expected, begun to explore widely. Their journeys have taken them across much of England as they explore and learn about the landscape for the first time.

Between these explorations, the birds have regularly been seen fishing for Grey Mullet in the estuaries of the Solent and observed in the skies over the Isle of Wight.

Bird enthusiasts and members of the public across the country have supported the project by reporting sightings of the eagles and sharing these via @seaeagleengland on social media.

Watch the release
Watch the moment the birds are released:

“We are delighted that we have been able to release this next group of birds this year as planned. We have seen from other reintroduction programmes that returning lost species offers real benefits for the health of our environment, and to people and local economies. This is particularly important at these difficult times as people rediscover nature and its benefits.

“It has been very exciting to follow the exploratory flights of the birds we released last year and to see how they are learning to live successfully in the English landscape.

“We have been particularly encouraged that the birds have been catching Grey Mullet in the estuaries of the Isle of Wight because we believe this will become an important food source as the population develops, and is one of the key reasons we considered the Isle of Wight and the South Coast suitable for a reintroduction.

“A project like this relies upon the involvement and support of many, many people. I would like to thank everyone who has helped us again this year including the local organisations and individuals on our steering group. We look forward to the day when these amazing birds become a regular feature in the skies above us.”

“We are now a year on from the release of the first six white-tailed eagles and it’s very encouraging to see them doing well. We have been following their movements closely using the satellite monitoring, field visits and reports from members of the public.

“It will be fascinating to see how the young birds released this summer explore and how they interact with the slightly older birds released in 2019. Thank you to everyone who continues to support us by reporting observations and photos of the birds as they travel around the country, we are always keen to hear about your amazing sightings.”

All of the young birds involved in the project are collected under a Scottish Natural Heritage licence from the wild in Scotland and brought to the Isle of Wight.

“Today is an important landmark for the conservation of these spectacular birds, and I am delighted that we have played our part by licensing this trailblazing project.

“A key condition of our licence was the involvement of stakeholders and ongoing monitoring, and Roy Dennis and his team have worked hard to involve local groups which has been critical to the success of this project.

“It’s been thrilling to see last year’s birds travel across England. I hope this project sets a blueprint for further successful species re-introductions in England, which are a vital part of achieving our overarching goal for nature conservation and recovery.”

Ideal habitat for these coastal loving birds
The Isle of Wight was chosen as the location to reintroduce the white-tailed eagles, also known as sea eagles, as it offers an ideal habitat for these coastal loving birds with plentiful sources of food in the surrounding waters. It also offers a central position on the south coast allowing the birds to disperse and link with other populations in Scotland, Ireland and on the continent.

Boosting the local economy
The project is also expected to make a significant contribution to the local economy. A similar scheme on The Isle of Mull was found to have boosted its local economy by up to £5 million a year, demonstrating the interest in this iconic bird.

A comprehensive feasibility study and public surveys were conducted prior to reintroduction and a steering group made up of local organisations and members of the community are helping to guide the project.

News shared by Sue on behalf of Forestry England. Ed

4 Comments on "Seven more white-tailed eagles released on the Isle of Wight: ‘A landmark for conservation of these spectacular birds’"

newest oldest most voted
Tamara
Great news! This will raise the spirits of wildlife enthusiasts during these troubled coronavirus times, as they follow the young birds’ progress on media sites like OnTheWight and try to spot them flying over the Island. It will be fascinating to learn where they choose to visit on their long exploratory flights on the mainland, how they will interact with last year’s cohort, and if any of… Read more »
Vote Up26-6Vote Down
Benny C

Maybe they can fix the chain ferry problem by carrying folk across the river. Sounds daft? You should read some of the things the IOWC Planning Committee are up to, or listen to Councillor Churchman opining on the radio. Now that’s properly daft.

Vote Up1-5Vote Down
Angela Hewitt
Come the winter the WTE’s (classified as a bird of little concern regarding rarity) diet will change to that of wading birds, hares, rabbits etc. As a lover of wading birds and with only 130 nesting curlew in the South of England, in decline and on the Red list, I worry for them. The 5 million pound increase in the Isle of Mull tourism was due to… Read more »
Vote Up5-11Vote Down
Angela Hewitt

PS now that they have bred them I suppose they have got to do something with them.