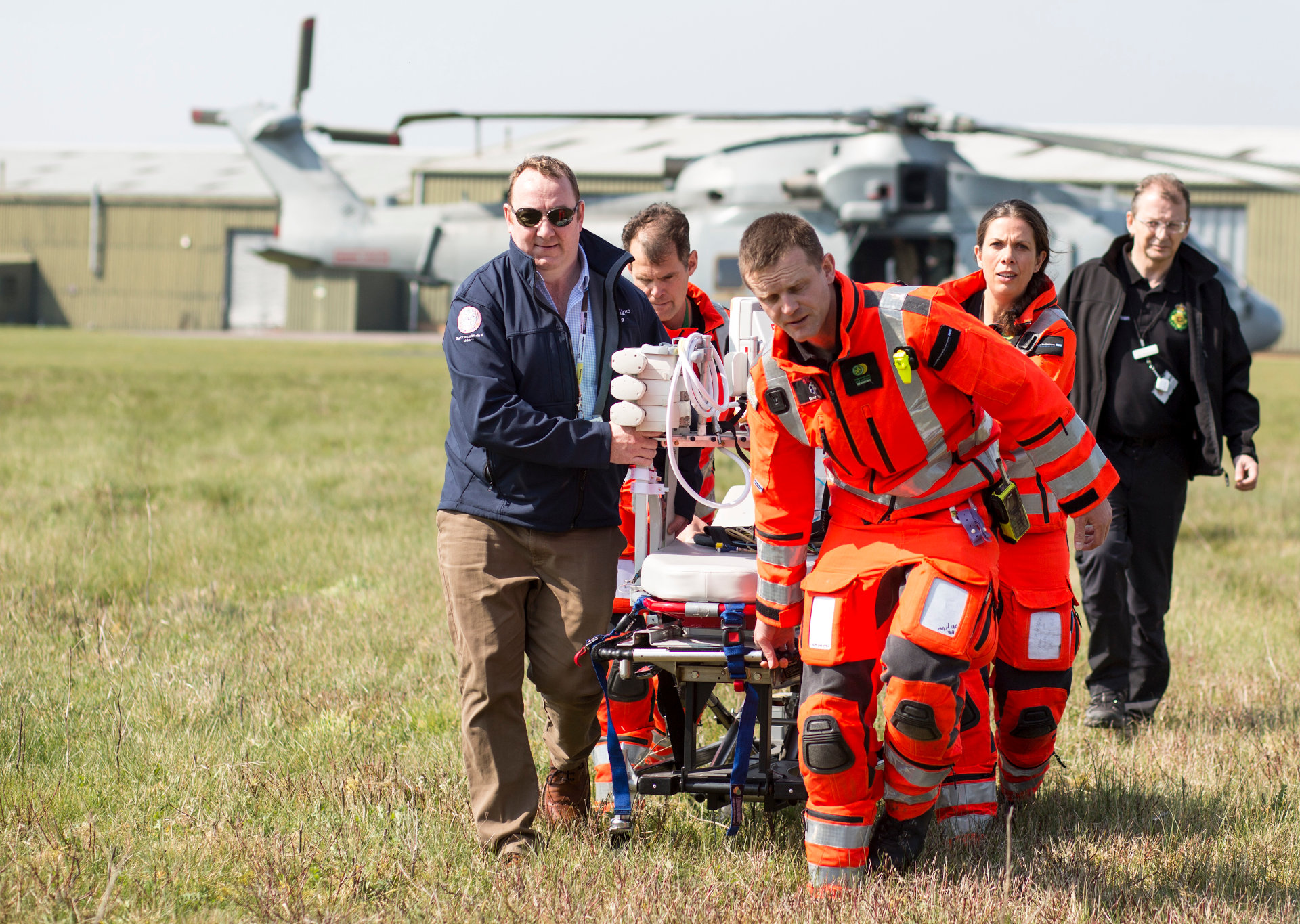 On Tuesday last week (7th April) the Charity undertook the first time-critical transfer of a patient from Jersey to University Hospital Southampton in an RAF Chinook.

Practice drills
The teams simulated loading critically ill, ventilated patients onto RAF Chinook, Puma and RN Merlin aircraft and then providing constant support and care to them inside the military aircraft.

The drills practiced during this exercise will be incorporated into new operating procedures being drawn up to oversee military aircrew and Air Ambulance services collaboration across the country.

“It is absolutely our duty to do everything that we can to ensure that patients on the Isle of Wight, and other more remote areas, get the necessary critical care during the current pandemic.

“This is a hugely impressive and vitally important collaboration with the RAF and I am immensely proud of our Critical Care clinicians and the Care Group Management team within University Hospital Southampton who have responded with flexibility and total selflessness to the rapidly evolving health crisis, displaying their  usual professionalism, dedication and teamwork.”

Three RAF Chinook helicopters on standby
The Charity’s teams of paramedics and doctors will be on hand to fly on board military helicopters, such as the RAF Chinook, providing urgent critical care to patients as they are transferred to major trauma centres across the country, including University Hospital Southampton and the new NHS Nightingale hospital at London’s ExCel Centre. Three RAF Chinook helicopters, which can carry up to two ventilated patients each, are currently on standby at RAF Odiham in Hampshire.

“A Chinook helicopter not only has the advantage of range and speed, but it also offers more space than the Hampshire and Isle of Wight Air Ambulance, allowing us to continue care for patients who could potentially be Covid-19 positive, whilst maintaining a safe distance from the military aircrew.”

Full PPE provided
In the meantime, the Charity continues to respond to critically ill patients across the region with both the Air Ambulance and emergency response vehicles remaining operational seven days a week, day and night.

Full personal protective equipment (PPE) has been made available to the Charity’s teams of doctors and Specialist Critical Care Paramedics in order to ensure that risks of infection are minimised when they attend the scene of an incident.

News shared by Andrew on behalf of Hampshire and Isle of Wight Air Ambulance (HIOWAA). Ed

This sounds like a good development. On the other hand, I have yet to see any update on the level of capacity in the general ambulance service to respond to increasing numbers of people with worsening symptoms….?

If a Chinook attempted to land on St Mary’s hospital helipad then the downdraft would probably blow away the cars in the carpark next to it.

Let’s hope not, but we must be thankful there are people who continue to care for us on the Isle of Wight, do you?

I am sure that they will come in useful for transporting the Scottish Guards/Isle of Wight Rifles when General Seely attempts to invade the Falklands/Poland or rescue johnson from yet another holiday in Mustique.

On a more practical note I wonder if they could be used to ensure that Island care home staff have adequate PPE.