A two-week exhibition celebrating the heritage of Appley Tower in Ryde opens on Bank Holiday Monday. 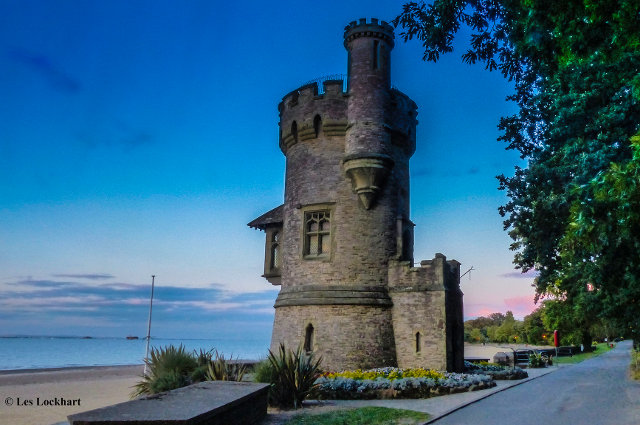 New Ryde Arts venue in Monkton Village is celebrating the image of the iconic Appley Tower from 26th August to 7th September 2019.

There are photographs (old and new), paintings and drawings produced by local artists on display.

Appley Tower, built in 1875 by William Hutt, is one of the most photographed and painted buildings on the Isle of Wight. The exhibition aims to raise interest in the future of the tower which is owned by Isle of Wight Council. It has been empty for nearly three years and there has been speculation at one time it was going to be sold as a luxury beach-hut.

Plan to Save the Tower
In 2017, Ryde East Councillor, Michael Lilley, started campaigning for the tower to remain in community ownership and approached IW Council and Ryde Town Council for support with local residents.

In 2018 and 2019, Michael has opened the Tower for guided tours on the annual Appley Day and this year 678 people took a look inside as part of a new feasibility study.

Michael has teamed up with Natural Enterprise, a local charity on the Island, who successfully submitted an application for funding a feasibility study to the UK Government Coastal Communities fund. The study is nearing completion and will set out a plan for the long-term sustainable future of the much loved tower.

“I am so pleased that the new Monkton Arts venue has decided to put on this exhibition as Appley Tower is such a big part of Ryde’s and Isle of Wight’s  Heritage. It is the symbol of one of the best beaches and parks on the Island and I am so honoured it is based in my ward.

“When I heard some years ago it was closed and could be sold, I just had to start campaigning for it to be kept in community ownership. Natural Enterprise have been fantastic and IW Council have been very supportive in giving time and support to find a sustainable future for the Tower.”

Renovation plans
He went on to say,

“I am hoping by December 2019 we have a published plan and able to start a funding campaign so vital renovation work can begin.

“Watch this space and please come and see the exhibition if you love everything about the Tower.”

Two week exhibition
Cllr Lilley, Mayor of Ryde, will be opening the two week exhibition on Bank Holiday Monday (at 5pm) and visitors and residents will be able to learn more about the tower and sign up as a supporter.

The exhibition will be open to public from 9am – 5pm from Tuesday 27th August to 7th September (Monday to Saturdays).

Brockbadger – you can knock Michael all you like but he works hard for his ward residents. What have you done for yours?

What a shame that the Exhibition opening falls after the Bank Holiday weekend.
Like the Bus Museum in the same area that is only open on Sunday and Monday this weekend, we realise that the events are looked after by volunteers. As it is the last BH weekend of the year, there are surely going to be lots of folks around who would be interested?

Cllr Lilley. If you want to get more funding support it might be an idea to do some simple advertising. ThankS to On the Wight l knew about the Exhibition.
Yesterday, along with 100’s of locals and visitors we walked along by the Tower. There wasn’t any sign of posters or leaflets advertising your event close by. In fact we have not seen any anywhere. Not very proactive.

Nice article by Michael about Michael.

Perhaps before making remarks about others, you ought to check that you haven’t sent us an article, authored by you, with quotes by you in it also.