Don’t miss this exhibition that explores the traditional visual art of punk culture from the mid 1970s to date, and its impact on the Isle of Wight through memorabilia such as posters, badges, ticket stubs, vinyl records, as well as show artworks by contemporary artists that retain a bit of punk ethos in their work today. 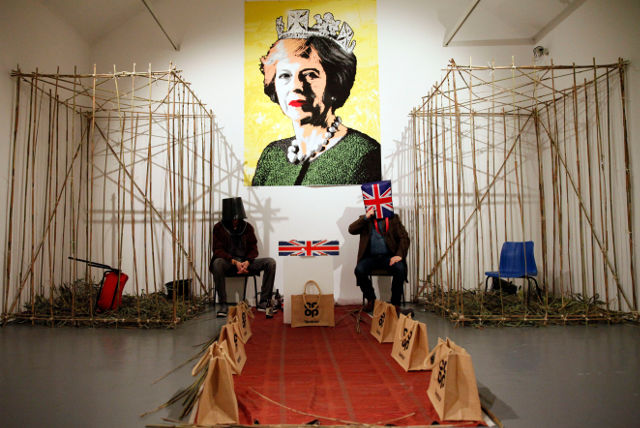 Until 9th February next year, Quay Arts will be celebrating punks, past and present on the Island and further afield, in the form of visual art, graphic design, graffiti, music and fashion in the exhibition titled, PUNK.

This in-house curated show aims to explore the traditional visual art of punk culture from the mid 1970s to now, and its impact on the Isle of Wight through memorabilia such as posters, badges, ticket stubs, vinyl records, as well as show artworks by contemporary artists that retain a bit of punk ethos in their work today.

Much of the work on display is kindly loaned by punk enthusiasts and ex-punk band members from the Isle of Wight.

Punk culture includes a diverse array of ideologies, fashion, and other forms of expression, visual art, literature, music and film. It is largely characterised by anti-establishment views and the promotion of individual freedom.

When planning the exhibition, we hoped to unearth punk personalities from the Isle of Wight. Quay Arts Centre Director Paul Armfield said,

“The recently deceased inventor of the Espresso Martini Dick Bradsell was formerly a notorious East Cowes punk, his legendary Bramble cocktail was inspired by blackberry picking here with his mum; whilst over the river David Steele of Cowes was busy fashioning a distinctive punk-reggae style of bass playing that would later be a major ingredient in the successes of The Beat and Fine Young Cannibals…..

“As someone whose first creative stirrings were as part of a pre-teen punk band (the shortly lived but brilliantly named Brain Explosion), I’ve seen many of my generation spurred on by the Do-It-Yourself attitude of the late 70s to go on and do great things.”

Other notable punks
Another notable punk from the Island is Nicholas Dingley, otherwise known as Razzle. A gifted drummer, Razzle played in an Island band called Thin Red Line, and in early 1982, Razzle joined London punk band The Dark. Later he went on to play in a famous band called Hanoi Rocks, but sadly Razzle died in a car crash aged only 24 while on tour in the US and never gained the full recognition he deserved as a musician. Another local punk hero would be the very person that helped found Quay Arts back in the late 70s. Artist, Anne Lewington, was across the River Medina one afternoon in ’75 and saw the Quay Arts building, then a disused brewery warehouse. Thinking it looked like a potential space for an art centre, she broke into the building, only to find the place filled with pigeon poo and disused arcade machines. It was all soon cleared and became the Isle of Wight Visual Arts Centre. What you see now, is all thanks to the punky charm of those artists who took that bold risk back in ‘75.

Both anti-establishment, both anarchic in style, they provide a fresh and alternative look at contemporary punk art as part of the exhibition.

Miles provides an insightful connection to how graffiti art dates right back to the punk scene in Downtown New York in the late ‘70s and how it transformed an entire visual look of album covers and public spaces throughout the rest of the world. Therefore, we’d like to thank everyone that has contributed items for the show and to the installation team that have volunteered their time in making this exhibition happen. If you have any images from the local punk scene, please get in touch with [email protected] for more info.

The exhibition runs from Saturday 1 December 2018 – Saturday 9 February 2019 in the West Gallery at Quay Arts.

Filed under: Island-wide, Isle of Wight Art, Newport, What's On