A great deal of love is shown for Isle of Wight produce by TV chef, James Martin, in the latest episode of his ‘Great British Adventure’, shown on ITV earlier this week and available on catch-up. Details within. 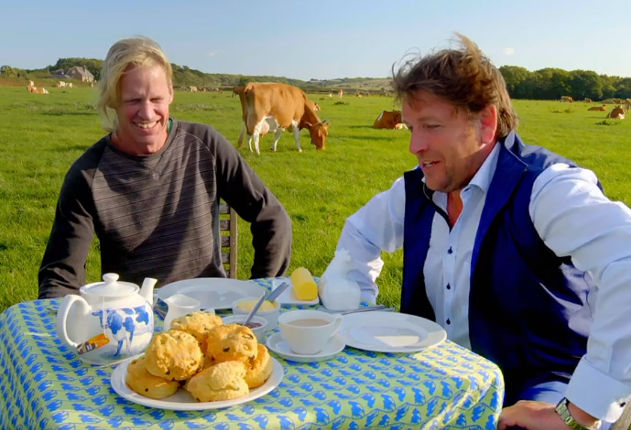 Episode 17 of ‘James Martin’s Great British Adventure’, screened on ITV earlier this week, was set on the Isle of Wight.

James travels across the Solent to the Isle of Wight with another chef, Lenny Carr-Roberts, and opens the programme by stating that he’s on his way to, “one of my favourites places in the UK, the Isle of Wight”.

Much love for IW produce
Lenny, who runs a restaurant in Hampshire explains that he uses a great deal of produce from the Isle of Wight, adding that “some of the best lamb you can get” is from the Island.

We’ll forgive James saying the Isle of Wight is in the county of Hampshire (sack the researcher for that gaff and the one about a £300,000 price tag for beach huts in Colwell Bay) because he waxes lyrical about the Island thereon after.

The programme really is a great promotion for the Isle of Wight and should help boost visitor numbers this year.

“Best ever” sausage rolls
James rocks up next to The Hut in Colwell for his outdoor kitchen, where he cooks two sensational dishes, but he sends Lenny off to Bembridge (just voted best village in the Countryfile Magazine awards) to discover to the butchers (Woodford and Sons) and their “best ever” sausage rolls.

Lenny is not disappointed, saying that if Michelin gave out Stars for sausage rolls, they’d give these ones from Woodford’s three.

Like James, Lenny heaps a ton of praise on the Island prodiucers, highlighting the, “respect people show their produce around the Island”.

Briddlesford beauties
Later in the programme James heads to Briddlesford Lodge Farm, where among other things, they produce butter, cheese and milk from their gorgeous, award-winning Guernsey cows. The 140-strong herd all descend from the 15 cows who arrived on the farm in 1923 with the current farmer’s great-grandfather.

James partakes in tea and scones in a field surrounded by Paul Griffin’s Guernsey cows before cooking another masterpiece over in Colwell Bay.

He ends the programme heading home on the ferry saying,

“I think the Isle of Wight is an amazing place and it just happens to have the best sausage rolls … end of.”

newest oldest most voted
Braveheart
Although James Martin’s show the Great British Adventure and all the wonderful comments made about the Island might be good advertising for attracting Tourists. However, the contradiction will be if the IWC have their way and build 10,000 new homes here for ‘Second Home Owners’ and ‘The Wealthy’ instead of building the types of property that are best suited to our needs. Tourism will soon dry up… Read more »
Vote Up16-1Vote Down