Southern Vectis were asked to offer a reduced £1 bus fare on the day of Isle of Wight climate change marches in order to encourage residents to take the bus rather than drive to take part. According to this reader they refused. 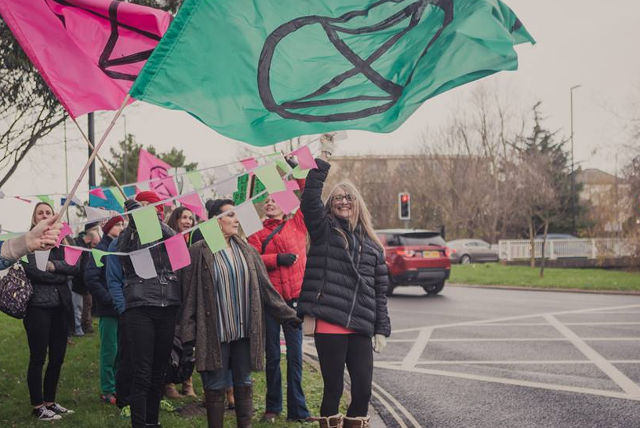 This from a concerned resident known to OnTheWight. Relevant to this letter is an article in the Guardian today, highlighting the message from Friends of the Earth that free bus travel, costing £3bn a year, would help address public health concerns around air quality and obesity. Ed

As you reported on your Website last month, the last Extinction Rebellion march brought together over 200 environmental campaigners, which was a large show of support for tackling climate change.

The next Extinction Rebellion event is to be held on Saturday 2nd March at 12.30pm gathering in St Thomas Square in Newport.

As knowledge of Extinction Rebellion has grown, it’s likely that a greater number of people would like to attend the next event, and that people from all over the Island would like to get there.

Southern Vectis refused £1 bus fare idea
When Southern Vectis were asked to offer a £1 reduced fare on that day (similar to the New Year’s Day offer) for people wanting to attend the next event, the response was not favourable.

Bus fares have always been exceedingly high on the Island. When Southern Vectis have been asked about this in the past, the response has always been it’s because they receive no subsidies from the Government.

Monopoly service
When the Isle of Wight Council do declare a state of climate emergency, then bus infrastructure is going to need Government investment as a way of tackling these emissions.

At present, we have no other bus service on the Island, Southern Vectis are the monopoly in this respect. More school buses are going to need to be on the road to replace the school run cars.

Tourists shocked at bus fares
We are a tourist destination: the amount of times I have spoken to tourists who have been shocked by our bus prices.

That needs to change for the good of the environment, residents and for the good of our tourist industry (with less people likely to use planes, it’s quite possible more people will visit the Island. Wouldn’t that be a boon to our economy?). Cheaper bus travel would also help pollution levels in Portsmouth and Southampton.

Incentivise bus travel
Bus travel needs to be incentivised for everyone to get out of their cars. Islanders have no other choice of public transport to get to Newport and most other Island towns.

Keeping in mind that the IPCC, in October 2018, gave a ‘window of opportunity’ of only 12 years to address CO2 levels, and that these levels are continuing to rise globally.

With regular news coming in from all around the world about the effects climate change, action needs to have happened Yesterday, such is the urgency of climate change.

Shouldn’t bus co address this issue?
People want to show their support in addressing climate change, and to get there in the most environmentally friendly way possible.

It would surely work to the benefit of Southern Vectis to incentivise people out of their cars.

Shouldn’t Southern Vectis work alongside the Public that it serves to highlight and address this issue?

Filed under: Environment, Green Issues, Island-wide, Letter to the Editor

4 Comments on "Letter: Why has Southern Vectis refused £1 bus fare for day of climate change marches?"

newest oldest most voted
Steve Goodman
(As reported two months ago), ‘Luxembourg is set to become the first country in the world to make all its public transport free. Fares on trains, trams and buses will be lifted next summer under the plans of the re-elected coalition government led by Xavier Bettel, who was sworn in for a second term as prime minister. Bettel, whose Democratic party will form a government with the… Read more »
Vote Up12-2Vote Down
Steve Goodman
Why? Presumably because despite the usual corporate greenwash (easily found online) the bosses, like so many other people including the politicians supposed to be serving us, will continue their usual damaging but still profitable for shareholders business as usual until forced to change in response to our climate emergency. As Sir David Attenborough, the world’s scientists, and lately even BBC TV news (link to follow) continue to… Read more »
Vote Up12-5Vote Down
Steve Goodman

Vote Up8-2Vote Down
truth
At the very core of this issue is that global warming is happening. This is only the beginning of it. When you research the ‘tipping point’ of global warming, when there is no going back, you are sadly looking at no future. And worse still, this is just around the corner, forecast with data that scientists have been recording for decades. All on upward trending graphs, just… Read more »
Vote Up9-2Vote Down