Prizes for top vaccinators, as just under half of Isle of Wight frontline staff decline flu vaccine

The Isle of Wight NHS Trust CEO, Maggie Oldham, said staff who were not vaccinated could be removed from frontline duties and that other trusts had discussed withholding sick pay if a staff member chose not to have the vaccine, and then caught the flu. 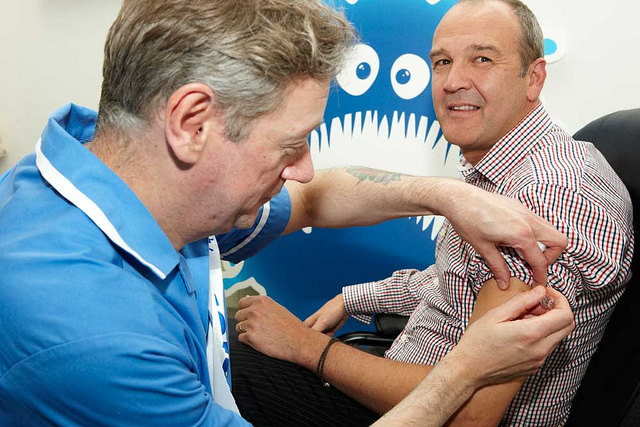 Just over half of frontline medical staff had the flu vaccine this year, despite a trust target of 100 per cent, with at least one person declining because they were vegan.

The Isle of Wight NHS Trust set an ‘ambitious target’ of vaccinating all healthcare workers who have direct contact with patients.

Nurses and midwives had the highest vaccination rate, at 60 per cent.

Adapting the campaign
The trust will now be looking at how to change its campaign for next year.

Needle phobic staff will be able to have pre-arranged walk in jabs which, the trust said, would reduce the anxiety of waiting.

Pay withheld?
In November, chief executive Maggie Oldham said staff who were not vaccinated could be removed from frontline duties.

Mrs Oldham said other trusts had discussed withholding sick pay if a staff member chose not to have the vaccine, and then caught the flu.

Meetings poorly attended
A paper due to go before the NHS trust board on Thursday said meetings held with department heads were poorly attended, and actions were not always carried through.

Due to other winter pressures, these were not prioritised.

Prizes for top vacccinators
The trust will also be holding a competition between peer vaccinators — whoever vaccinates the most staff will win a prize or award.

All vaccinators will be given a target of 30-40 vaccines, spread across a clinical area.

6 Comments on "Prizes for top vaccinators, as just under half of Isle of Wight frontline staff decline flu vaccine"

Anyone see a problem with rewarding people for vaccinating?

A comparison of sick days taken between vaccinated and unvaccinated staff would be interesting.

Trouble is the vaccine is formulated at least 6 months prior to use and is formulated under a best guess scenario, the boffins try and look forward to conditions etc to see which strain will be most effective!
Flu can kill, but is it right to force an injection on an employee?
I think not!

And is it right that said employee catches flu and then infects an already sick patient, perhaps putting their life in danger?
I think not!

Vote Up11-24Vote Down
dumbledor
I find it incredible that any NHS staff would refuse to be vaccinated against the flue. They are lucky to be offered it considering the rest of the public have to pay unless they fall into vulnerable group categories (like the elderly). They represent an organisation based on delivering evidence-based medicines. How irresponsible of them! This leads me to ask: 1) what sort of message do they… Read more »
Vote Up13-61Vote Down
wellsm

I totally agree. The internet “campaigns” against vaccination based on no validated evidence are putting whole populations at risk. Smallpox was wiped out in this country, why?, because the the government at the time made the vaccination compulsory. As it should do now with MMR.