Reopening Undercliff Drive is ‘crucial to our way of life’, says Parish Councillor 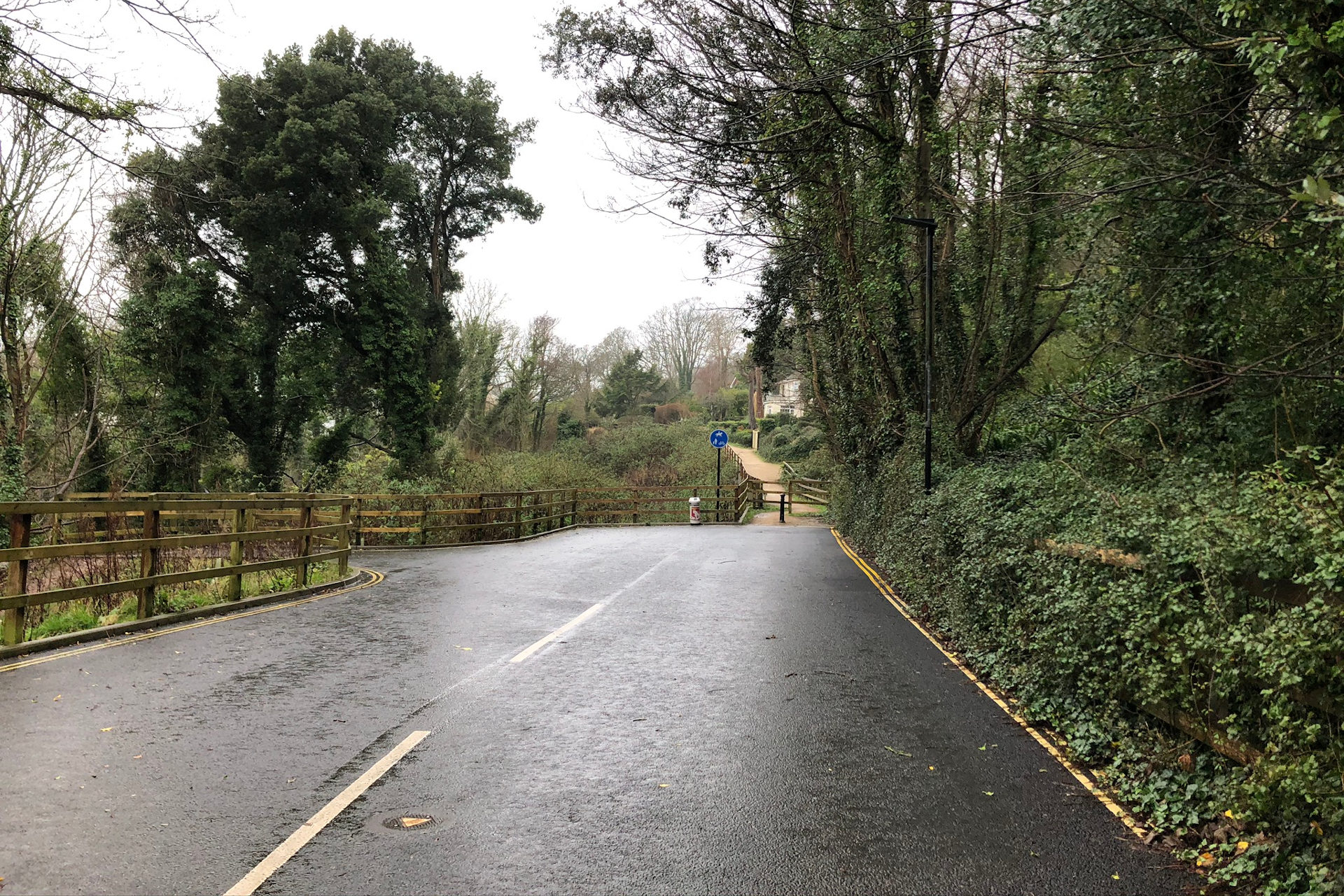 Following news that Isle of Wight council have submitted a funding bid to the Government with a view to reopening Undercliff Drive to traffic, Niton and Whitwell Parish Councillor, Jon Boileau Goad, got in touch.

He shared with OnTheWight details of the “determined work” undertaken by the Parish Council since the 2014 landslip on Undercliff Drive.

Loss of footfall and jobs
Cllr Boileau Goad explained that the landslip has resulted in the “loss of jobs and loss of footfall of visitors and locals to the businesses”, all of whom have had to make adjustments to survive.

“Chale is now without any form of shop, as is Whitwell, and the local population needs the Niton businesses to survive if they are to be able to maintain a reasonable standard of living.”

Two children knocked down
Explaining the difficulties with traffic being re-routed he said,

“The routing of cars, buses and trucks through the B roads of Whitwell and Niton has caused damage to the roads and pavements, and whilst no deaths have occurred, at least two children and one adult have been knocked down on roads which were never constructed to take the extra weight and numbers of vehicles.”

Pushing forward despite “aggressive remarks”
According to Cllr Boileau Goad the actions and remarks of some local representatives have been unpleasant and aggressive, he said,

“The Niton and Whitwell Parish Council has been the main driver in achieving this current state – despite the often thoroughly unpleasant and aggressive remarks and actions of some local representatives – and has kept pressure on the Isle of Wight Council, as well as raised the matter with the previous Prime Minister and relevant government departments.

“We became aware within weeks of the financial impact upon our businesses and agreed that our community could not survive if we lost these vital assets.”

Working to help support businesses
A number of initiatives have been spearheaded by the Parish Council in order to support the local businesses. The councillor went on to add,

“The Buddle Inn and The White Lion have had a very bad time, while the Garage has not replaced one of the mechanics who left to join the Forces.

“Working together we supported where we could and have tried to increase the visitor numbers to the area through a series of advertised activities – Saturday Markets, improved footpaths and enhanced Recreational areas in Niton and Castlehaven and most recently, the first attempt at a Soap Box derby for Children, to name but a few.”

Local activities to encourage visitors
In other initiatives the Parish Council are about to publish a Smugglers Trail for walkers and ramblers to follow that will not only teach local history, but also ensure visitors can find the shops and pubs in the village.

As well as an online version of the trail expected by the end of the summer, there are plans for a Trim Trail and enhanced Recreation Ground play equipment – all ideas aimed at attracting visitors to use the facilities and enjoy all that Niton and Whitwell has to offer.

Keeping up the pressure
Cllr Boileau Goad explained that since the landslip of 2014, the Parish Council has kept up pressure on anyone and everyone they felt could help get the road opened.

“At times it seemed that all would be lost and that so much of what was said to the Parish Council was in fact either misleading or worse, but recently things have seemed to turn a corner and this latest news is a potential life line for the community.”

“We now need to maintain the pressure and hold those that delay or dither to account.

“There’s been almost seven years in which to prepare a plan, but I wonder if the Isle of Wight Council have actually done anything in the way of costed options, or indeed, options!

“The reinstatement of the road is crucial to our way of life and it is not to used as a political point scoring exercise, but actioned in such a way as to safeguard and enhance all our lives, including the environment that we all treasure for now and the future.

“We have the opportunity and now we must use it well for the benefit of all.”

18 Comments on "Reopening Undercliff Drive is ‘crucial to our way of life’, says Parish Councillor"

A bit different to the picture painted by the councillor from Ventnor yesterday – And much more in keeping with the reality I’ve observed.

Vote Up33-9Vote Down
Benny C
Interesting take on this topic and well explained arguments. However, reliable local pals in Niton Have more than once told me The Buddle lost trade when it Changed hands, hiked prices, lost its authenticity and atmosphere at the hands of a cheap looking refurb and then it shut several nights of the week. All great ways to lose valuable local trade. Concurrently the little bar in the… Read more »
Vote Up24-6Vote Down
Nitonia
Can only agree with you Benny. To try and blame the loss of trade for the Buddle and White Lion on Undercliffe Drive being closed is absolute ridiculous. The Buddle is seldom used by locals anymore partly due to its inconsistent opening hours but most due to its astronomical pricing both of its drinks and of its no better than average food. The White Lion has reopened… Read more »
Vote Up22-3Vote Down
Colin
The second of two interesting articles with differing views. I don’t see what the Chale shop has to do with it. If anything it has increased trade at Niton as the nearest post office and shop. And Nitonia is spot on about the two pubs. Undercliffe drive is always going to suffer with movement whether or not it is reinstated. The sensible solution would be to improve… Read more »
Vote Up14-2Vote Down
CB500
100% in agreement with this. Ventnor has lost a huge amount of through traffic as potential trade goes across the top of the town. I find it beyond belief that Ventnor Town Council have apparently, according to St Lawrence nimby councillor Peace, voted against this opportunity to open the road. If that is the case, and maybe Simon and Sally could confirm that, then I believe the… Read more »
Vote Up25-9Vote Down
Tamara
What has the lack of a shop in Chale and Whitwell got to do with the Undercliff Drive? You don’t have to use that road to access shops in Niton! If you did, it would be a long detour! Where is the evidence that many businesses in the area are being badly affected by the closure of this road? There are very few businesses along it, and… Read more »
Vote Up13-3Vote Down
Benny C
Exactly. CoOp, Tesco, Cantina, Hursts all do well enough in Ventnor. Tesco arrived after the road closure if I remember correctly. And on the seafront the fish shop does a roaring trade. You can’t get a seat in the Smoking Lobster on a Friday without a booking. These businesses are well run by folks who know their customer. They’re fundamentally good operators. The conclusion about the remainder… Read more »
Vote Up70Vote Down
Benny C
I called the garage. Two weeks wait. So, Mr Councillor, get your facts straight and respond please! There seems at last to be a fair amount of common sense emanating from this growing trail of correspondence and we would all like to know where your facts are coming from. If you are trying to support the businesses of a few folks you happen to know at the… Read more »
Vote Up13-3Vote Down
bigj
The title ‘crucial to our way of life’, rather sets the tone for this fabrication, further assisted by a very out of date photograph of the area under discussion. (see below) In reality I now have a beautiful and popular, all weather walk, between Ventnor and Niton, serviced by Southern Vectis at both ends, which attracts extra visitors to the area. Trade at the Buddle was and… Read more »
Vote Up13-5Vote Down
Stuart George

Don’t forget bus service 31, running between Ventnor & St.Lawrence (on page 71 of the current bus timetable), which makes the walk between St.Lawrence and Niton even shorter.

Vote Up8-1Vote Down
Phil Jordan
It’s become a fairly polarised issue between those directly affected by the landslip in St Lawrence and those affected further away in Niton and Whitwell because of re-routed traffic. It’s not possible to “re-open” the road because parts of it no longer exist. I know most people understand that but the language of “opening” the road conveys a false impression. To create a vehicle accessed road through… Read more »
Vote Up19-4Vote Down
Benny C

Excellent clearly set out facts, thank you. Not what everyone wants to hear but facts are facts and I seem to recall there were strong suspicions that the failure of the Council to properly run the previous drainage system contributed to recent landslides. Is that correct?

I wish we had more of this sensible factual approach in the heads of our politicians.

Vote Up10-1Vote Down
prof
You make some good points Phil but I would question if something as major as this rebuild really comes under the remit of the PFI which only covers normal maintenance. I realise we have little leverage over the D.O.T but surely we can at least challenge such a clearly inaccurate assertion. Are you seriously saying that you are willing to potentially write off whole communities should future… Read more »
Vote Up3-5Vote Down
Phil Jordan
The PFI was a total highways network upgrade scheme. Seven years of upgrade and eighteen years of maintenance. In addition, there were listed around (from memory now) 19 ‘geotechnical’ schemes that were included within the upgrade period. The Undercliff was one of those geotechnical schemes. It has been on that basis, thus far, that Government has refused to provide further money for the Undercliff road in a… Read more »
Vote Up120Vote Down
Steve Goodman
Another reminder of the ‘clearly inaccurate assertions’ by the Jay, Giles, and Love gang at the PFI puff & promise public meetings ahead of the adoption of something Private Eye readers and others knew we should avoid switching to… As documented many times here OTW and elsewhere, we were repeatedly wrongly told that the pricey ‘best ever and not at all flawed’ PFI scam would solve the… Read more »
Vote Up10-1Vote Down
Sally Perry
The photo that was used has now been replaced. I didn’t have an up-to-date photo showing ‘road closed’ from the Ventnor end, but have just popped up there (in the rain) to take some new photos to avoid any criticism in future articles. As you’ll see from the hundreds of articles in the Undercliff Drive archive, we have used photos of the road as it is now,… Read more »
Vote Up120Vote Down
bigj
Thank you Sally for the photographs: above and beyond the call of duty. With such efficiency in mind, if you were to challenge Dave Stewart or his shadow, Jon Goad, and stand for public office then you certainly get my vote. Until such time, Phil Jordan has clearly and concisely listed the reasons why this is nothing more than a folly destined to fail. His information, and… Read more »
Vote Up7-1Vote Down
islandliving100

Direct action is the only way to go these days.

Dinosaur Dave and his cronies will push forward their own agendas, regardless of what people are saying on these forums.
Just look at the unnecessary works at St Mary’s roundabout. If after £9 million they achieve anything positive I’ll eat my hat