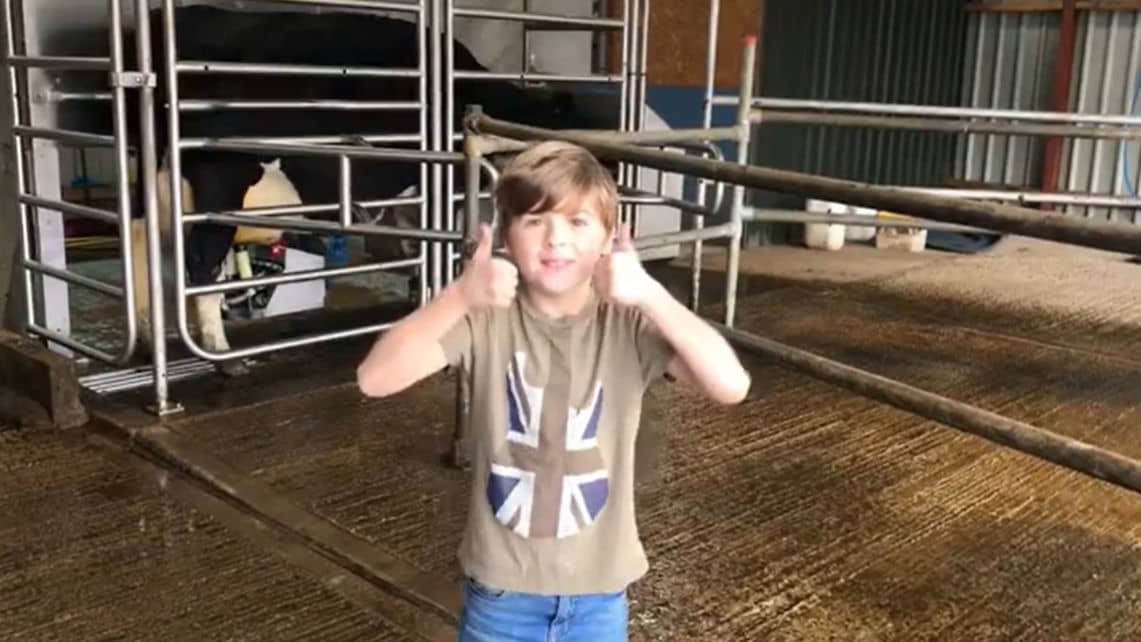 A poignant video message from an eight-year-old boy who one day wants to take on threatened Westridge Farm, is the focal point of a petition to save it.

Plans are currently being discussed by the Isle of Wight Council for a development on the Elmifield, Ryde — turning the currently working dairy farm into 475-home West Acre Park.

Comments on the application have now closed and it is awaiting the final decision, which is likely to come before the Isle of Wight Council’s planning committee.

Over 400 objections
According to the farming family, who risk losing their home and business if the development gets approved, more than 400 objections have been submitted to the council and they are now calling for further support in objecting the building works.

The Hollidays have been the tenant farmers at Westridge Farm since 1966 and so far two generations have been at the helm.

In a video message on the Save Westridge Farm Facebook page, Archie thanked everyone who submitted an objection but is not asking people to ‘help his dream of becoming a farmer [at Westridge] one day’ by signing and sharing a petition.

Since it was started over the weekend, more than 260 people have added their name to the list of objectors.

Objections to the application
Reasons people are objecting to the development, apart from the loss of the farm, include the lack of infrastructure around Ryde, especially with the numerous developments planned for the area; the loss of green space and habitats; and the seeming connection of Ryde to Nettlestone and Seaview.

Official objections have been submitted by The Woodland Trust and Tenant Farmers’ Association with Natural England and Island Roads, asking for more information from developers, Captiva Homes, before views can be made.

Lilley: The family’s future looks bleak
Cllr Michael Lilley, Ryde East representative, has renewed his calls for the application to be rejected by saying the historic, last farm in Ryde would be lost forever during an especially hard time due to Covid-19.

“The family’s 2021 is bleak unless we stand up with them and protest against this application.

“Please support them as they really need your humanity and support, please sign, get all your family to sign, get your friends to sign and please share to everyone you know. This planning application is simply wrong.”

newest oldest most voted
alisonjane
That poor little boy. Imagine being just 8 years old and realising that everything in your short life revolves around money and making a profit! To wake up and think that no one cares about your home, your future or your family because they are too busy trying to sell it out from under you just to make a profit. Bless your little heart Archie. IOW Council… Read more »
Vote Up31-5Vote Down
Eagle eye
When is this going before the planning committee? This application is wrong on so many levels and it all came about due to the council pushing through the Hope Road development. Captiva stated that there would be no further development once the 80 houses were built. Where are the companies morals, forgot, pure greed got in the way. It will come back to haunt them if this… Read more »
Vote Up240Vote Down
choccofrolik

Please, please – all those concerned with this young man’s and his family’s future, please sign the petition against this (surely) breach of human rights. Not mention a valued farm, green space and all the wild animals therein.

I’m against the proposal, but I think to say it’s breaching human rights might be over-egging it.

The only eggs concerned in my view are the ones sold by Westridge Farm. If you bother to look into the rights of children according to the UN, they have the “RIGHT TO HAVE SHELTER, THE RIGHT TO BE HEARD AND THE RIGHT TO HAVE THEIR OWN VIEWS TAKEN INTO ACCOUNT IN MATTERS WHICH AFFECT THEIR FUTURE”.