WASPI in Westminster for opposition debate

Among those making the journey to Westminster last week for the WASPI rally were members of Solent WASPI Supporters’ Group (Southampton, Portsmouth, South Hampshire and the Isle of Wight). Shelagh reports back on proceedings. 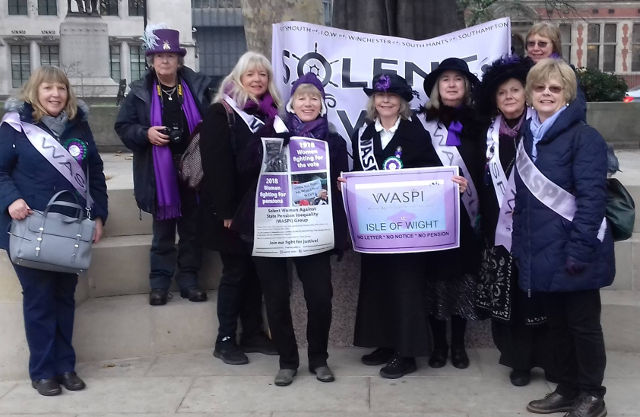 Purple-clad Women Against State Pension Inequality (WASPI) campaigners – from the south coast to the Scottish Borders – converged on Westminster on Thursday, 22nd November for the latest Opposition debate on the equalisation of the State Pension Age (SPA) for women born in the 1950s.

This group of women has had up to six years added to their SPA, with little or no notice. WASPI believes it is right for men and women to receive their state pension at the same age but objects to the way the policy was introduced, which left inadequate time for women born in the 1950s to make financial and work preparations for such a life-impacting change. It campaigns for fair transitional state pension arrangements for all those affected.

Showing their support
Some WASPI supporters went into Westminster Hall to watch the debate. Due to demand, those who were unable to get seats in the Strangers’ Gallery watched on a screen in another room. Others braved the cold outside and stood in Old Palace Yard, chanting, singing, blowing whistles and letting MPs know they were there.

Among those making the journey were members of Solent WASPI Supporters’ Group (Southampton, Portsmouth, South Hampshire and the Isle of Wight).

SNP MP secured the debate
Thursday’s debate was secured by Scottish National Party MP, Patricia Gibson, who spoke of “the weight of despair, the burning sense of injustice and the genuine bewilderment felt by the women who, by sheer bad luck, were born in the 1950s and thereby inexplicably became fair game to be robbed, mugged and made the victims of theft of the most cruel and callous kind”.

She said she had received many messages of support from MPs who were unable to attend.

Seely: “Deeply disappointing Government should treat them in such a disrespectful way”
Isle of Wight Conservative MP, Robert Seely, was among those who spoke:

“The 10,000 or so WASPI women in my constituency are certainly not natural protesters who wave a placard at the first opportunity. In fact, they have played a very positive role in our communities throughout the years. They are to be found in the women’s institute, making jam, and in many other voluntary groups. It is deeply disappointing that any Government should treat them in such a disrespectful way.

“Considering that the Chancellor announced more money in the recent Budget, it would have been nice if that Budget had given the WASPI women some recognition.”

In a later intervention, he said:

“For us to ignore these ladies and their plight, in effect because we think they will not dissent, go out on the streets or cause problems, is fundamentally to disrespect them and their contributions to public life.”

“We are extremely grateful to Bob Seely for his support. He has listened carefully to his constituents and accepts that thousands of them on the Island have been treated very unfairly.

“We would also like to thank him for the recognition he has given to our member Yvonne Yelland and her team’s tireless efforts in bringing the issue to his and public attention.”

Opperman: Issue “would not be revisited”
Regrettably, the Government’s intransigence in refusing to act continued with the official response from Under-Secretary of State for Pensions, Guy Opperman.

He insisted the issue would not be revisited, citing “intergenerational unfairness” among his reasons. But he was reminded by several MPs of the unfairness WASPI women have endured throughout their lives, including in employment and pension opportunities.

Such a state has been noticeably absent from the lives of this generation of women.

“This debate is important, coming as it does in the wake of a recent report by the UN Rapporteur for Extreme Poverty and Human Rights. In his statement of 16th November 2018, Professor Philip Alston noted:

“As was made clear to me in a number of submissions and through powerful personal testimony, a group of women born in the 1950s have been particularly impacted by an abrupt and poorly phased in change in the state pension age from 60 to 66.

“The impact of the changes to pensionable age is such as to severely penalize those who happen to be on the cusp of retirement and who had well-founded expectations of entering the next phase of their lives, rather than being plunged back into a workforce for which many of them were ill-prepared and to which they could not reasonably have been expected to adjust with no notice.”

The Parliamentary and Health Service Ombudsman is currently considering carrying out an investigation into the way the SPA changes were implemented by the Department for Work and Pensions (DWP).

The Minister confirmed that, if such an investigation should take place, “the Government will co-operate in full with that process.”

We hope an inquiry will be launched and we urge all MPs to commit to supporting its recommendations.

Make presence felt until we get justice
Solent WASPI concluded:

“We are grateful to the many MPs, across all parties, who steadfastly work on our behalf, and especially to those who spoke in today’s debate. We will make our presence felt at every parliamentary debate until we get justice. The Government needs to know that every quoted statistic represents real women.

“Some have had to sell their homes to make ends meet. Some have been awarded divorce settlements based on the SPA of 60. Some are struggling to cope in poor health. Others are single with no partner support. But regardless of circumstances, ALL have suffered an injustice and the Government has a duty to put that right.

“For every woman who made the journey to London there were many who could not. We were there for all those invisible women around the country who deserve state pension justice. And we will be there on every occasion until we get it.”

Did Bob buy any jam?