Cllr Cameron is minuted as stating that Yarmouth Town Council approve of the school closure when it is the opposite. A 1,882 strong petition was handed in this week to County Hall opposing the changes. 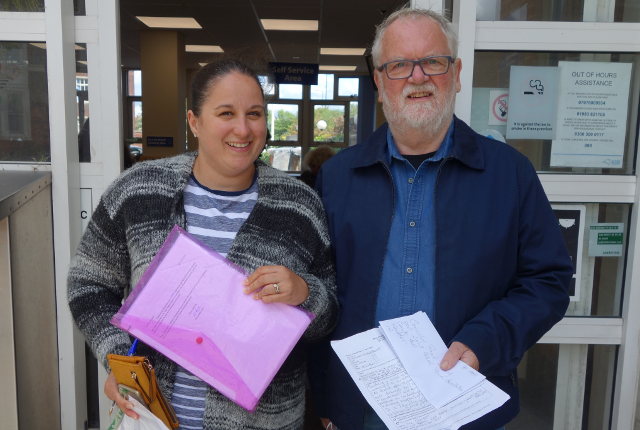 The West Wight schools consultation has ended up becoming incredibly divisive as Yarmouth and Freshwater both battle to retain their primary school.

IWC Chairman sharing inaccurate information
Yarmouth Mayor, Steve Cowley, has been in touch pointing out that Cllr George Cameron (the current Chairman of the Isle of Wight council and Freshwater North councillor) is reported in the minutes of the 21st May Freshwater Parish Council meeting as saying “that Yarmouth were accepting the proposal”.

“Yarmouth Town Council and Shalfleet Parish Council both support keeping Yarmouth School in Yarmouth because the current preferred option is too disruptive of local children’s education, does not address the issue of surplus school places and is not value for money.”

1,882 strong petition
Earlier this week a petition with 1,882 signatures to keep the primary school in Yarmouth was presented at County Hall.

Cllr Brading disputes this claim, telling OnTheWight he said nothing about the town council.

“If you look at the response from the Governors of the Federation of Shalfleet Yarmouth Schools, you will see that the parents of the children from Freshwater, currently sending their children to Yarmouth Primary School, also oppose the current plan.

Brading: “All children deserve to be taught in a Good school”
Cllr Brading told OnTheWight,

“I have now completed two consultations on the issue of the serious excess in Primary School places in the West Wight. Both consultations have been very extensively completed by residents right across West Wight, and I am very grateful for all the responses.

“The second consultation is now being evaluated pending a decision on the way forward in line with the stated timeframes.

“In making the decision I will have listened to all the educational points raised, and doing what is right for the children, both now, and looking ahead at the long term sustainability of Primary Education in the west Wight.

“All children deserve to be taught in a Good school, giving them the best start in life, and that’s what I intend to do.”

A positive campaign
Mr Cowley went on to say,

“The parents of Yarmouth pupils and the Community of Yarmouth have run a very positive campaign to secure the future of Yarmouth School.

“They have based the campaign on sound educational grounds and a positive analysis of the number of school places, demonstrating that a large school in Freshwater will have a negative effect on all three ‘Good’ Schools. Small schools have an excellent record educationally and in delivering a caring, enriching environment.

“The Council Leader, Dave Stewart, has stated that it is his policy to have all Isle of Wight children in ‘good schools’.

“This latest ‘preferred option’ goes against his own policy, as transplanting a ‘good’ school against the wishes of parents, Governors and the local community is likely to damage its outcomes.”

The ‘end of consultation report’ is due to head to the July Cabinet meeting.

Federation response
You can read the submission by The Federation of the Church Schools of Shalfleet and Yarmouth to Cllr Brading below. Click on the full screen icon to see larger version.

Article edit
9.20am 15/6 – Update from Cllr Brading added, denying claim he made inaccurate comments about Yarmouth Town Council on Radio Solent and quote from him.

newest oldest most voted
Colin
The simple solution would be not to close any of the West Wight schools. The small primary at Totland closed a few years ago which was fair enough but there is no neccessity other than in the IWC collective mind to close any others. Given that All Saints has had a number of years with sub-standard reports, one wonders why the IWC has done little to improve… Read more »
Vote Up17-2Vote Down