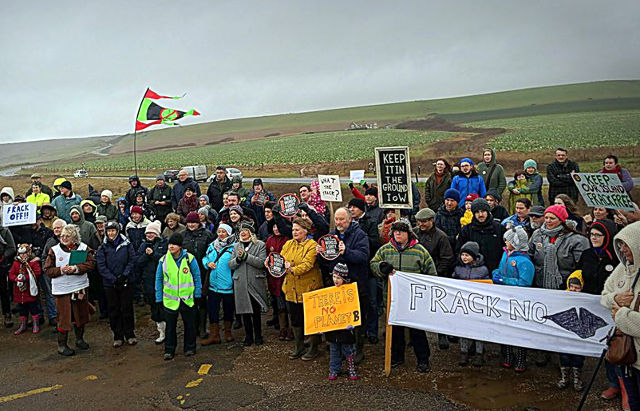 Sylvia May shares this latest news from Frack Free Isle of Wight. Ed

Firstly, it promotes the belief that the UK could replicate the US ‘Shale Gas Revolution’ despite there being no evidence to substantiate this. It is already widely accepted that factors such as geological differences and an obvious lack of vast expanses of sparsely populated areas support the contrary opinion that a UK shale gas revolution is far from likely.

“It is very frustrating to keep hearing that shale gas is going to solve our energy problems – there’s no evidence for that whatsoever… it’s hype.

“It’s extraordinary that ministers keep making these statements. They clearly want to create a narrative. But we are researchers – we deal in facts, not narratives. And at the moment there is no evidence on how shale gas will develop in the UK. Shale gas has been completely oversold. Where ministers got this rhetoric from I have absolutely no idea. It’s very misleading for the public.”

Stripping away protection
We share Professor Watson’s frustration. Not only is the current ruling party persisting with their pledge to go all out for shale, they are now adding insult to injury by promising to strip away yet another layer of protection for local communities, stating ‘We will legislate to change planning law for shale applications. Non-fracking drilling will be treated as permitted development’.

So, what does this mean? In a nutshell, it means non-fracking wells will no longer need planning permission. However, as if that wasn’t bad enough, thanks to a gaping loophole created by recent changes to the Infrastructure Act which introduced a very specific political definition of fracking(c) based solely on the volume of fluid used, what this means in reality is even more disturbing.

No permission needed for non-fracking wells
If this plan goes ahead it will enable thousands of oil and gas wells to be drilled without any requirement for planning permission whatsoever, regardless of whether they are conventional or unconventional, single or multiple well pads, vertical or directional drilling, using acidisation or other chemicals and stimulation techniques. All ‘non-fracking’ wells. But here’s the twist.

Because of the loop hole definition, a non-fracking well CAN be fracked so long as it isn’t expected to exceed the specific volume of fluid in the definition! Using this same definition, a large proportion of the wells fracked in the US shale revolution would be defined as non-fracking wells, as would Cuadrilla’s infamous Preese Hall well in Lancashire, closed down in 2011 after causing 2 earthquakes but only using 8,400 cubic metres of fluid – short of the 10,000 cubic metres required for it to be defined as fracking.

Appeal to Conservatives
We therefore call upon every Conservative Party member, supporter, donor, Councillor, MP, prospective MP and voter to demand Theresa May rescind this policy with immediate effect.

newest oldest most voted
iain mckie
At fifty bucks a barrel I never believed that large scale franking was a possibility. However, now that Rough is about to close permanently makes it much more likely – certainly for gas exploitation. But the fact that only one new CCGT has opened in four years despite plans for about fifteen makes it difficult to see how it will be used, especially after the new LNG… Read more »
Vote Up00Vote Down
sandman
After the council Elections, I find it difficult to support the anti-fracking campaign now, although I really don’t want Fracking on the island. The main areas that Fracking is going to impact the Island most of the electorate decided to vote for a Conservative candidate for council, which I find incredible. The Lib Dems and Greens have consistently opposed Fracking on the island and have indicated this… Read more »
Vote Up00Vote Down
iain mckie

I am pretty sure that no council will have the power to stop franking.

Vote Up00Vote Down
Caconym
Is Theresa May deliberately trying to throw this election? While she had already alienated anyone with a modicum of conscience many months ago, she seems determined to anger the Daily Mail brigade as well with: Dementia Tax. Winter fuel allowance going for most pensioners. No immigration targets. Keeping foreign aid at the same level. And, now, Fracking for all….. If I was a conspiracy theorist I’d almost… Read more »
Vote Up00Vote Down