Cowes Enterprise College hosts hustings on Climate Change, with positive feedback from all

Bob Seely said it was the best hustings he has been to in his political career, as students asked a range of questions on the subject of climate change 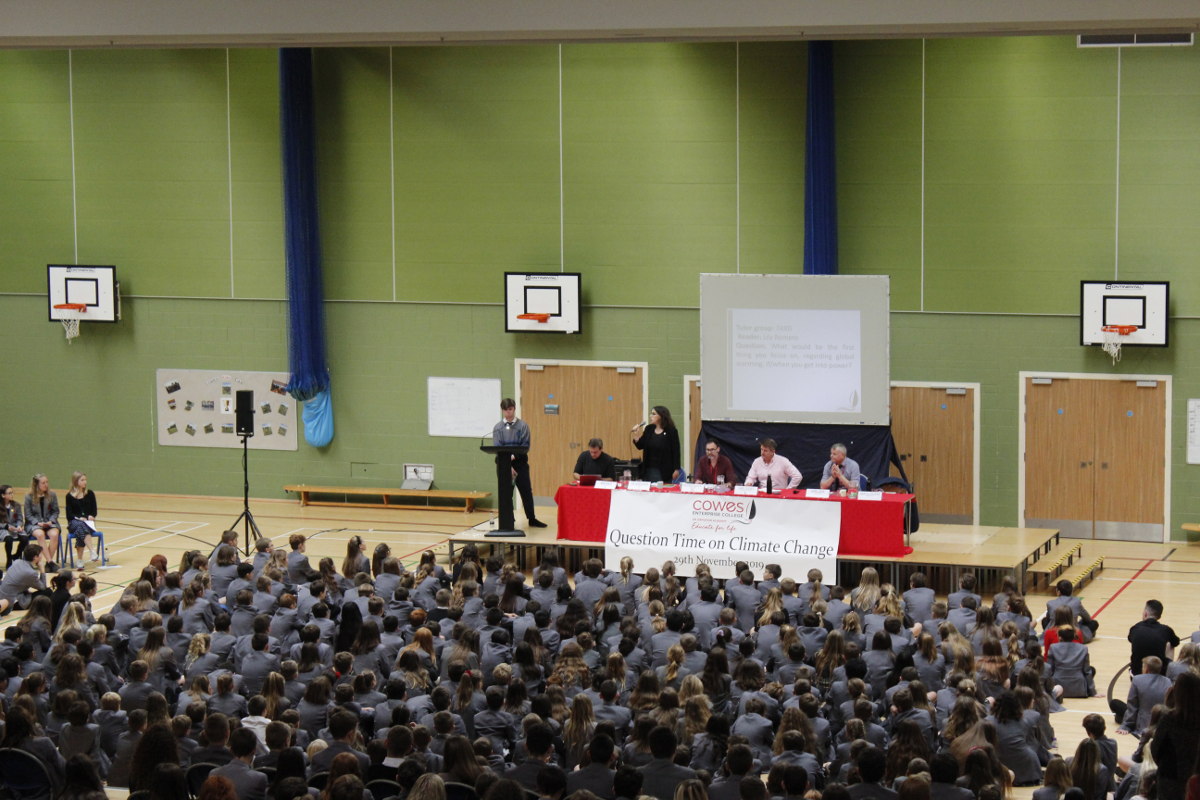 Students at the school, which is sponsored by Ormiston Academies Trust (OAT), wrote and democratically selected questions on the environment, which were asked to the panel of candidates hoping to be the next MP for the Isle of Wight. The hustings took place in front of the school’s entire population of over 1,200 students.

Wide range of questions
Questions included one from Lotty in Year 10, who asked, “How can we help you and how can you work with us to achieve a more sustainable future for the Isle of Wight?” and Lily in Year 7, who asked, “What would be the first thing you focus on, regarding global warming, if you get into power?”

Every moment of the event was run by students in the Sixth Form, skilfully led by Head Girl, Beth Pitts. The Chair for the hustings was Head Boy, Kieran Wetherick, who did a strong job of keeping the panel in order. Year 8 student Oriol was responsible for live tweeting the event to the school’s Twitter, whilst pupil Victoria took on the job of official photographer.

Seely: Best hustings ever
Bob Seely, Conservative prospective parliamentary candidate for the Isle of Wight, commented that it was the best hustings event he had been to in his career, whilst the school enjoyed positive feedback from other delegates.

‘Global Strike 4 Future’
Cowes Enterprise College has long prioritised encouraging students to ‘be the change they want to see’ and play an active role in making their voices heard. The school is taking part in the ‘Global Strike 4 Future’ and earlier this year marked the international climate change protest day with a day of student-led social action.

Special lesson time was devoted to learning more about the democratic process, whilst an ‘Eco Council’ conference was held to enable students to put together a plan of action and write letters to politicians.

How elections work
Before the hustings, all students in the school were briefed by the tutor on the process of voting and how a local vote links into a national vote and makes a different, as well as the issues of climate change and sustainability and their link to the candidate’s manifestos.

“Hosting our own Question Time event, centred solely on the crucial issue of climate change, was a great way for our students to recognise how important their voices are. It was hugely encouraging to see them so actively involved in the political process and hear from the candidates about how impressed they were with their efforts.

“We look forward to continuing to support our students to demonstrate their keen social and political awareness with similar student-led initiatives in the future.”

5 Comments on "Cowes Enterprise College hosts hustings on Climate Change, with positive feedback from all"

Never mind about Bob Seely schmoozing about what he and the Conservatives will be doing, how about all the things they haven’t been doing up to now, and why would anyone in their right mind believe they are about to radically change?

“Seely: Best hustings ever
Bob Seely, Conservative prospective parliamentary candidate for the Isle of Wight, commented that it was the best hustings event he had been to in his career, whilst the school enjoyed positive f

Really? So what did the other candidates actually say? Or are you just ‘spinning’ Bob Seely?

Vote Up19-6Vote Down
susan
I wonder if Bob Seely mentioned that his party, the Conservatives, will be at the forefront of raping the Ocean bed for the minerals necessary to make batteries for next generation electric cars. It’s a nightmare about to happen that will destroy marine life. As if we haven’t destroyed enough life on the planet already! The point is, this seabed surface mining will take place in very… Read more »
Vote Up8-2Vote Down
Alternative Perspective
Susan, a few years ago everyone was told to buy diesel powered cars, now it’s electric. The truth is, there are simply way too many cars on our roads. Petrol, diesel, electric, they all have negative environmental implications. The answer is to invest in efficient modes of public transport, however Bob Seely’s Party, the Conservatives, has increasingly made public transport prohibitively expensive for many people, particularly those… Read more »
Vote Up8-3Vote Down
Rowan

Well done the Cowes students! It sounds like a superb event.
But like Jenny Smart I would also like to know what the different candidates actually said.