The developer of the 2.8 acre site in Ryde, who has been working on the project for six years, has now pulled out. 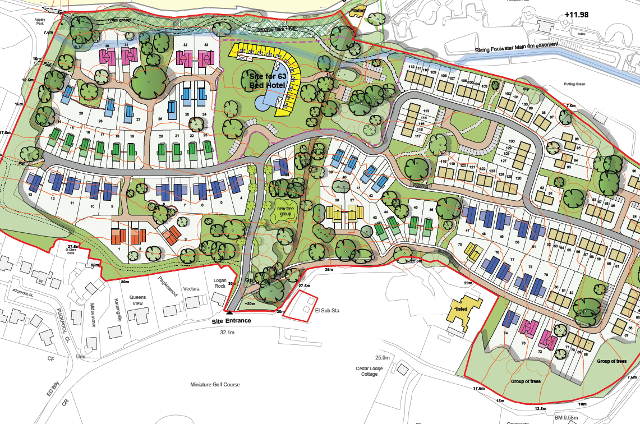 The developer behind the large-scale redevelopment of Harcourt Sands has confirmed to OnTheWight they have taken the decision to pull out.

The project on the site of an ex-holiday camp, adjacent to Puckpool Park, near Ryde has been at least six years in development.

It had been granted permission for 128 residential dwellings, alongside a tourism proposal that would comprise either a 63 bed hotel or 15 holiday units.

The redevelopment of Harcourt Sands was one of the Isle of Wight council’s “11 key strategic sites”.

Long-running project
The redevelopment has been ongoing for at least six years. After a long period of applying for planing permission, the then-developer, ZeroC, was finally granted outline planning permission by Isle of Wight council at the end of 2015 and had hoped to start work in Summer 2016.

Consultation with the public as to how they wanted the site to be developed had been on going since at least July 2012.

Land Agent
Speaking to the Land Agent (they act for the land owner), OnTheWight learnt a few more details.

When asked how long ZeroC had not been involved, OnTheWight was told it was “very recently”.

When asked what the next move was, we were told:

“The land owner will do what they can to bring it forward for development.”

IWC Regeneration response
We asked Chris Ashman, the Isle of Wight council lead for Regeneration for his comment on this change, he replied

“Disappointing to hear about Zero C’s decision. The Isle of Wight council regeneration team will seek to support the landowner in identifying other potential development partners.”

Many thanks to Peter for the lead on this one.

I would guess ,having looked at ZeroC ‘s accounts (free)on companies house, that they have worked out that the profit on sales would not be up to there usual standard due to the extra costs of ferries and do the Island have sufficient highly paid jobs to warrant the high price of new housing.

Sally, Simon, we desperately need the rest of this story (and we’re unlikely to get it from anywhere else). Why did they pull out? How did IWC allow one of “11 key strategic sites” to fall by the wayside? Who is the landowner?

Forgive my ignorance, cruiser, but what’s a non-cellular company? And are we sure it has nothing to do with Irish companies of similar name (not to mention the Kazakh national airline!)

Vote Up10Vote Down
Steve Goodman
The current (May 4th) CP report of this story has just been brought to my attention by somebody suggesting that the current council response may reflect some overdue improvement since the disgraceful decade and a half of Frank James Hospital neglect, as demonstrated by (Private Eye’s present “Spiv of the year” and IWC’s cabinet member for business development and regeneration) Con. Cllr. Wayne Whittle’s words – “As… Read more »
Vote Up7-2Vote Down
electrickery

Unfortunately thay’ve just spent £19.5M buying up dubious commercial properties in Kent, so CP isn’t looking likely. And do we really think IWC could manage a major development? The recent record is not encouraging.