The small, but growing business based in Ryde on the Isle of Wight appears today on the BBC’s main UK news site. 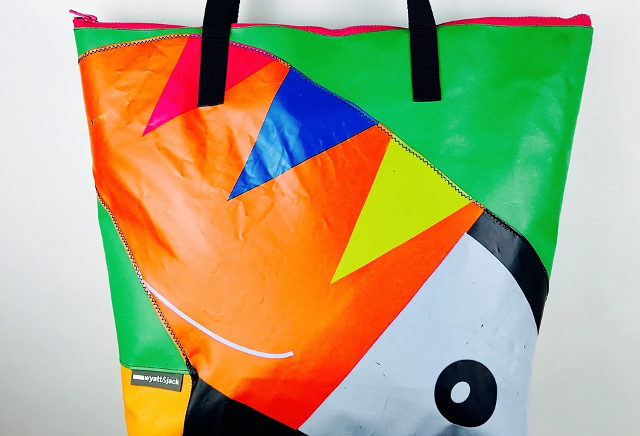 Great news for Wyatt and Jack – the Isle of Wight-based company that creates sustainable bags and accessories from unwanted materials such as former deck chairs, bouncy castles and inflatables.

The small, but growing business based in Ryde on the Isle of Wight appears today on the BBC’s main UK news site, with a feature by Hazel Shearing titled, ‘Plastic waste: What to do with your inflatable when it goes pop’.

Following their growth
OnTheWight first started featuring Wyatt and Jack way back in 2014, when they started creating beautiful bags from old deckchair and bouncy castle material.

We highlighted their Inflatable Amnesty kickstarter appeal last summer, and then again in January this year when Majorca was added to the 21 drop-off points around the world for unwanted inflatables.

In March we were able to share the much-guarded news that Jeremy Deller’s life-size inflatable Stone Henge artwork, Sacrilege, joined the Inflatable Amnesty at Wyatt and Jack.

Even places like Hovertravel are getting in on the act, with an unwanted skirt of the hovercraft making its way to the Wyatt & Jack workshop.

This small Isle of Wight business continues to grow, whilst retaining their principles and integrity – not an easy task in the competitive world of retail.

Find out more about the business by visiting their flagship store on Union Street, Ryde or visit their Website.

I’ve bought a lot from here… they are brilliant 💕

Don’t you have a bag then?

If you genuinely care about the planet, then you’ll buy less ‘stuff’