The Isle of Wight could have been ‘dog friendly’, but councillors rejected it last year

With the recent outrage at dog ban proposals OnTheWight has been looking back. Guess what? Last year Cllr Lilley tried to get the council to agree a motion make the Isle of Wight a “dog-friendly Island”. It was rejected. Here’s what happened then and the reasons given 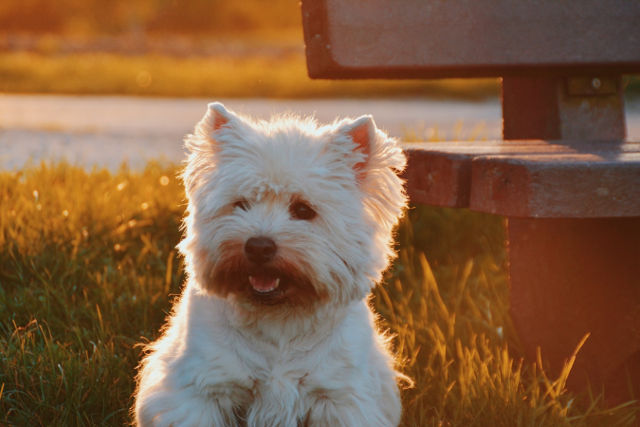 The motion was seconded by Cllr Julie Jones-Evans (Ind) was debated in the full council meeting, but fell after 22 councillors voted against it, with only 13 in favour.

Outlaw: “More signs won’t make a difference”
Cllr Tig Outlaw (Con), who is the Cabinet member due to make the delegated decision on the latest plans to ban dogs from cemeteries and to be on a lead in several parks, had said last year that he would vote against Cllr Lilley’s motion.

He said there were already signs in the streets and whilst “majority of dog owners are responsible, more signs won’t make difference”.

Abraham: Not enough people to enforce it
Cllr Barry Abraham (Con) also said he wouldn’t support the motion, because they “already have signs”.

He went on to say there were not enough people within council to enforce the strategy and that it was easy trying to bounce the council into spending more money without thinking about it.

Ward: Supportive
Unlike his Conservative colleagues, Cllr Ian Ward (Con) had said that although he’s not a dog person he would support the motion, adding that “maybe a softer and more friendly approach will be more effective than the signage”.

THAT the IW Council resolves in principle to make Isle of Wight a dog (with a responsible owner) friendly Island by adopting the Hampshire County Council’s Canine Countryside Strategy which promotes responsible dog owners and makes the Island sea and landscape a place for everyone to enjoy and recommends that Cabinet investigate the introduction of such a strategy.

Image: freedomdust under CC BY 2.0

10 Comments on "The Isle of Wight could have been ‘dog friendly’, but councillors rejected it last year"

Our island has a high elderly proportion, for many, owning a dog is not only companionship but also an important part of keeping active, getting out walking, meeting people, and represents an important part of maintaining wellbeing. To place restrictions on such activity illustrates how totally out of touch our Council is with our island community.

‘The Isle of Wight could have been ‘dog friendly’, but councillors rejected last year’

Who were the IWC Councillors who voted against Cllr Lilley’s motion back in September 2018?

There wasn’t a named vote for this one, but I am sure some of them will come on to declare how they voted

Vote Up28-3Vote Down
michael5rydeeast
Just for information, the motion I proposed in 2018, was from a recommendation from Birds Aware Solent. They recommended that a strong Dog Friendly Island Strategy based on the successful Hampshire County Council’s Canine Countryside Strategy, would support responsible dog owners, give information to dog owning tourists where to go and not go, protect wildlife and migrating birds and tackle irresponsible dog owners. There is existing funding… Read more »
Vote Up240Vote Down
Angela Hewitt
The enjoyment and benefit of owning a dog are indisputable. Both for children, teaching them to be caring and responsible, for benefits to people with mental health issues and for companionship for all especially the elderly. I had a golden retriever for 14 years and it was indeed a joy. Sadly a few dog owners spoil it for everyone else. Dogs running wild through wildlife areas where… Read more »
Vote Up23-9Vote Down
davimel
Wow! You make it sound as if packs of wild dogs are running amok killing and destroying with abandon.. The truth is somewhat different. As a responcible dog owner, one who takes his dog 365 days a year in rain snow and sunshine I can honestly say that in the past 20 years I know of 1 dog that fit your description, a dog that was walked… Read more »
Vote Up13-13Vote Down
Barry
As usual there are two sides to these discussions I have personally no issues with dogs that are under control. But I do object to the small minority of owners who let their dog off leads when other dogs are around & on leads I have had,personal experience of dogs off lead trying to attack my dog while on she is on a lead. It can be… Read more »
Vote Up8-1Vote Down
mariner58
Some little while ago now my children were playing with a ball on the beach when they were unexpectedly joined by a hitherto unseen black labrador wanting to join in. It was a fully grown and good natured but still young, very excitable, slobbering and very vocal animal that proceeded to knock my then four year old, son to the ground and, fortunately harmlessly trample, him leaving… Read more »
Vote Up10-4Vote Down