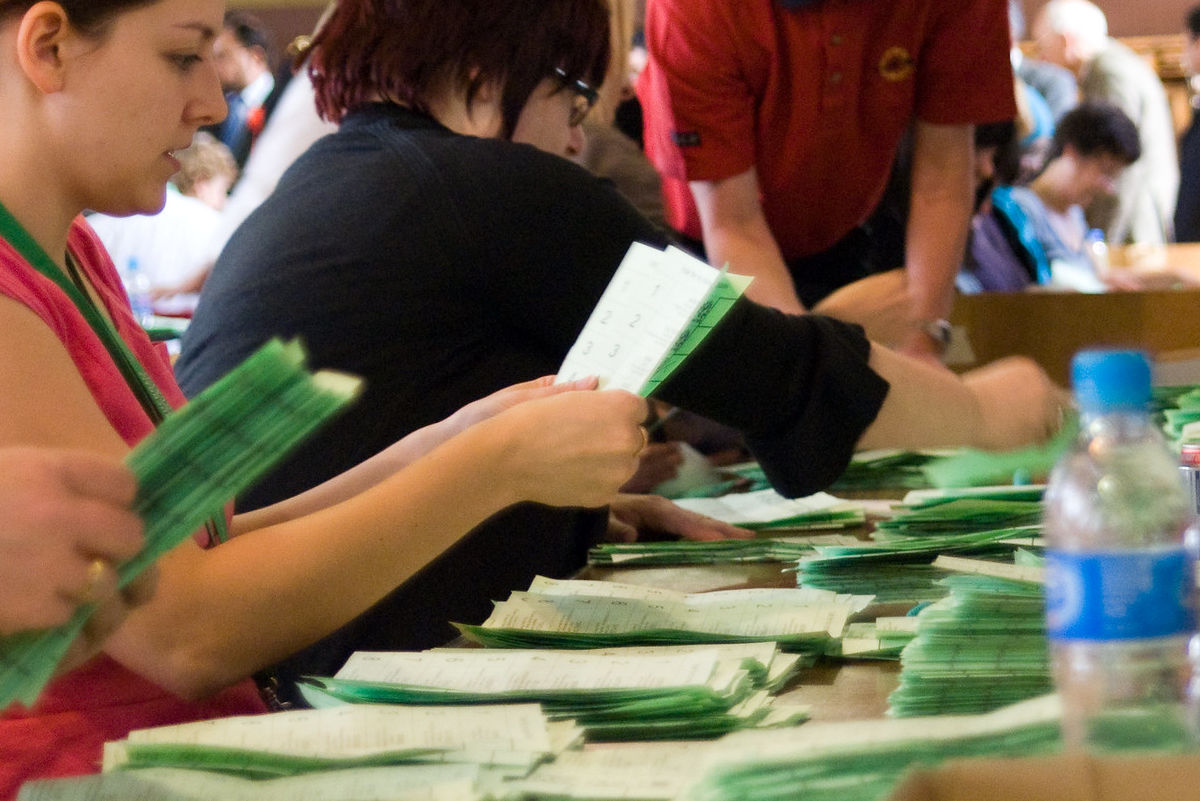 Thousands of people have turned out since 7am this morning to cast their votes in the General Election, called by Conservative Prime Minister, Boris Johnson in October.

As usual, OnTheWight will be at the Count, this year being held in the main sports hall of Medina Leisure Centre.

Live updates all night
Throughout the night, from around 9.30pm, we’ll be bringing you live updates from the heart of the action and will be able to reveal which candidate fielded the most votes to take the Isle of Wight seat in Parliament.

Our thanks to Allan Marsh for joining us tonight with his many lens and photography skills to capture such great photos. If you see yourself in any and want a copy, contact Allan via his photographic studio in East Cowes via Facebook.

03:11
It looks as though many tables have finished counting. The ballot papers have been sorted, counted and clipped together. Now we wait for the final numbers to be verified.

02:39
Intense interest at one particular table

02:25
Bob Seely has perched down at one of the press tables and is busy scribbling away on a piece of paper – his acceptance speech?

00:39
A hush descends as stage two of the count begins

01:28
Managed to catch a shot of Richard Quigley (Labour) who has been here for quite a while.

01:21
Stage two of the count now starts with the papers being sorted into candidates (the first stage was just to count the number of ballot papers)

23:32
The Green Party candidate, Vix Lowthion, who has had the BBC following her around today is also here now too.

23:20
Counting well in progress now, with every table counting

23:07
Carl Feeney (Independent Network) was one of the first candidates to arrive.

22:53
Isle of Wight residents had a choice of six candidates. In alphabetical order, those standing:

22:46
David Pugh, former leader of Isle of Wight council, who is the agent for Bob Seely and also Chairman of the Island Conservatives has arrived. Here he is chatting to Whippingham councillor, Stephen Hendry.

22:43
A quick thanks to Steve G for lending us one of his laptops for the night (use use desktop computers usually)

22:41
And whoosh, out spill the first ballot papers to be counted

22:20
The first ballot box has been opened and counting has begun

22:15
Simon Wiggins is now briefing the counters. They are about to start first stage, only counting number of papers, not looking at how people have voted. This is an important part of the count ensuring all polling stations and ballot boxes have been delivered. They will be counting against the ballot account filled out at the polling stations.

Checking ballot papers not used or spoiled or replaced. He stresses that accuracy is more important than speed to obtain the verification figure. Final results must reconcile with that figure.

He will announce where ballot boxes go over the PA system, so the observers from all the candidates know where to stand.

The last ballot box will arrive no later than 11.30 – and the first stage completed soon after.

The parliamentary election result is expected no later than 3-4am!

Newport West local election and St Helens Parish council elections are being counted in the other smaller hall.

22:05
Clare Shand is addressing the room – she explains how the count will work. Official returning officer is High Sheriff Geoff Underwood. He’ll be announcing the result.

Counters are being pointed to the secrecy notices in order to maintain integrity of the count.

21:51
The table managers are being briefed

21:36
The polling stations close in 15 minutes. We were met with queues in Ventnor earlier today

Shooting for OnTheWight
Isle of Wight photographer Allan Marsh LRPS has kindly agreed to shoot for OnTheWight for the evening. You can see his work on his Flickr Page and find out more about his photographic studio in East Cowes via Facebook.