Do you take your trailer to the dump? Better get your tape measure out come Monday

Amey/IWC have quietly changed the rules on members of the public taking trailers into the dump. If they’re judged as ‘too long’, they won’t let you in after Monday. OnTheWight has asked them ‘Why?’ 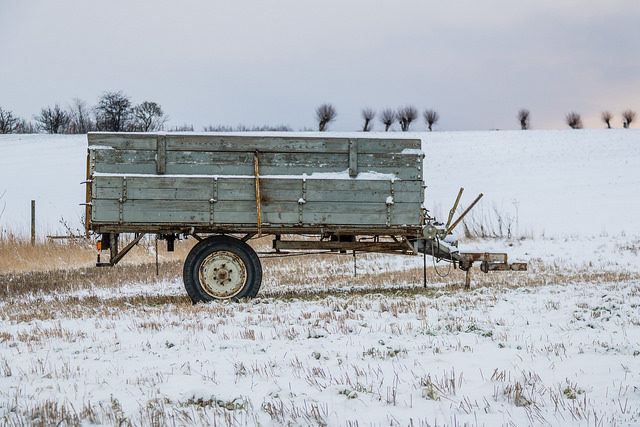 From Monday 5th June, trailers longer than 1.83m will not be permitted on site at the Lynnbottom tip or Afton Marsh household waste recycling centres.

Back in April OnTheWight shared a letter from South Wight resident Andy S-C, who expressed his disappointment at the plans, having just purchased a 2m trailer for the express purpose to taking stuff to the dump.

This was followed last month by a letter from Gordon Payne, who declared Isle of Wight Council a ‘most short-sighted, ignorant and stupid collection of officials’.

Many Islanders use trailers to dispose of household or garden waste at the recycling centres, and with 6.6ft being a common trailer size, they are going to be sorely disappointed come Monday.

Why the change in rules?
OnTheWight got in touch with the council to find out whether they’d reconsider the ban, or at least extend the trailer length allowable to 2m.

Paraphrasing, the response was a categorical ‘No’. Why? Because the layout of Lynnbottom won’t allow for it.

A spokesperson for the Isle of Wight council told OnTheWight,

“Unfortunately, the combined length of a vehicle, hook-up and trailer over 6 foot/1.83m exceeds the parking bays length, and the length of the accessible bay, this constricts the traffic flow within the Lynnbottom site.

“With over 200,000 visits by members of the public each year, to Lynnbottom, it is important that the council and Amey take consideration of the safety of all users, public and staff. This includes ensuring safe vehicle movements and reducing queuing on Briddlesford Road. If users unhooked trailers and used an adjoining bay, this would impede other users from accessing the site and increase congestion on the highway.”

Enhanced facility?
With the promise of an enhanced facility following groundworks at Lynnbottom last year, OnTheWight was curious to understand what research on use of trailers had been carried out by Amey and IWC.

The council spokesperson told us,

“Detailed studies of the site, which included vehicle tracking and swept path analysis have formed the Site Traffic Management Plan. Part of this work has led to the inclusion of an accessible bay (drive in, drive out) for users with mobility difficulties, that can also be accessed vehicles towing a trailer length of up to 1.83cm/ 6 foot.

“The vehicle tracking analysis has identified that the maximum length of a trailer being towed by a vehicle that the accessible bay can safely accommodate without impacting on safe movement of vehicles and other pedestrians around the site, is 1.83cm/6 foot.

“The decision to introduce the new site rules relating to trailers over 1.83m/6 foot was a joint one between the Isle of Wight Council and Amey who both have a legal responsibility for the safety of the members of the public that use our recycling centres and for our staff.”

Based on that response, it doesn’t appear any research was carried out to look at how many people use trailers and what length is the most common – the study appears only to relate to what can be accommodated based on the current layout chosen by Amey and the IWC.

Reverse only safety measure
The spokesperson finished by telling us,

“Lynnbottom operates a number of parking bays all of which are reverse-only to comply with safety guidance and decrease unload times for users. With limited space available at Lynnbottom, the site must provide suitable parking facilities for users while not obstructing exit routes or impede the movements of other vehicles.

“This can cause delays for users attempting to enter or exit the site which can cause delays on Briddlesford Road. We have a duty under national health and safety guidance to reduce the risk of road traffic incidents on the highway and reducing traffic delays caused by traffic entering the site.”

Why not consider in redesign?
Some might suggest that given the IWC were aware that trailers larger than 1.83m can cause an obstruction, they should have redesigned the layout accordingly, carrying out the work while Lynnbottom was closed for two weeks, or Afton Marsh was closed for three weeks.

Instead, it looks as though the only option for Islanders wishing to recyle household waste or garden waste, is to attempt to sell their 2m+ trailers and invest in one that is 1.83m or shorter.

Let’s hope it doesn’t result in more flytipping around the Island, as that not only looks bad, but brings a cost for the council each time the rubbish has to be collected.

Image: infomastern under CC BY 2.0

11 Comments on "Do you take your trailer to the dump? Better get your tape measure out come Monday"

Ok so plan is to put wheelbarrow on my massive trailer and ferry loads in from just outside tip. Whose with me? See you on the verge. Bring high vis and use your hazard lights.

Good idea “cowes” but that may not work.
When I lived near the weekend tip I used to walk round to it with my black sacks of rubbish in a pull behind children’s trolley (Radio Flyer type) and was told I was not allowed to walk on to the site I was only allowed to drive in!

So, I have a 2m trailer and two cars, with more than 200mm difference between them.

That’s the length argument shown as being of straw then.

This is little to do with size of trailer and everything to do with lack of thought, and a “we know best” attitude, by management on the waste contract.

Sorry being a bit obtuse this evening (red wine sweats approaching) are we talking about the overall length of the trailer or the length of the actual carrying space?

Are they heading down the path of trailers over 6ft are considered commercial waste and therefore chargeable?

Vote Up10Vote Down
supermaz
Good grief! Are they all idiots? What is the matter with the ‘council’ and Amey? Do they really want everyone to fly tip? Is that the intention? Does no-one have any ‘common’ sense? Sorry about all the questions, but really! Sympathies with Black Dog. I would have thought that it would make sense to listen to people and what is the norm and comply with that, which… Read more »
Vote Up10Vote Down
greenfiremouse
Sorry, this argument is just nonsensical. For a start, I always thought that we had got rid of imperial measurements for this kind of thing. At least, that is what school children are taught. And if there is a problem with exceeding length, then it should be the overall length of car + trailer that should be the deciding factor. For instance, my Ford Mondeo estate is… Read more »
Vote Up10Vote Down
Caconym

But, but, but, weren’t we supposed to be free of all of this bureaucracy and silly rules now we are leaving the EU?

But, hey, I guess we are far better off having proper British silly rules instead of those damn Franco German ones, eh?

When we have left the EU, (because for some unfathomable reason we are still being good and obeying all their bureaucratic edicts), at least we will know who made the ‘silly rules’ and be able to demand action from them.

And good luck with that, ‘cos Dave ain’t listnin’…..

Nor are two of his ‘seedy’ chosen executive members (Chris Whitehouse, or whoever he is pretending to be at the moment, and Wayne Whittle.)

It might be called common sense, but clearly there’s not much of it about