Votes at 16: Find out what your Isle of Wight councillor said

Find out what your Isle of Wight councillor had to say about giving 16 year olds the vote when it was discussed in the council chamber last week, and see whether you agree with them. 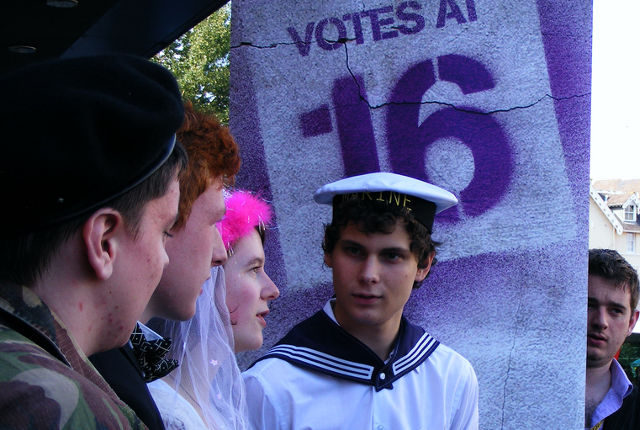 Young people aged 16 and 17 can get married or register a civil partnership with consent. They can drive a moped, can consent to sexual activity with others aged 16 and over and can drink alcohol with a meal if accompanied by someone over 18.

They can live on their own, join the army and work up to 40 hours a week. But they cannot vote in political elections.

Votes at 16
At last week’s full council meeting (catch up here), members voted in favour of a motion seeking to support votes for 16 and 17 year old Islanders.

The motion (see details of the amendment, which was accepted) had been put forward by Labour councillor, Geoff Brodie after being approached by former Deputy Youth MP, Will Matthews, about getting support for this campaign.

Giving hope to the aspirations of young people
Cllr Brodie explained that he’d been approached by many young people in favour of the voting age being lowered to 16 year olds.

He went on to say that those who work (16-17 year olds) are taxable and there should be no taxation without representation, adding that if the motion were passed it would give some hope to the aspirations of young people on the Isle of Wight.

Lilley: Support needed for the young
The motion was seconded by Cllr Michael Lilley (Green).

Adding an Island perspective to the national campaign to lower the voting age, Cllr Lilley pointed to the increasing older population – something supported by the average age of those in the council chamber – adding his view that the Island needs to robustly tackle the issue, otherwise there’ll be no one to “pay taxes or look after us when we’re older”.

Garratt: Young people capable of making decisions
Cllr Andrew Garratt (LibDem) pointed out that next year sees the 50th anniversary of the voting age being reduced from from 21 to 18.

He added that there’s nothing about today’s 16 and 17 year olds that suggest they are in no way able to make decisions.

Cllr Julia Baker-Smith (Ind) and Cllr Julie Jones-Evans both referred to the 100th anniversary of women’s right to vote, adding that councillors should afford the same to 16 and 17 year olds.

Fuller: “Not happy”
Cllr Paul Fuller told members that he wasn’t happy with Cllr Hutchinson’s amendment, adding that it watered down the motion too much.

He said that he’d been lobbied by a lot of 16 and 17 year olds about the issue, who called for his support for getting the right to vote.

Cllr Fuller said he was surprised that Cllr Brodie had accepted the amendment.

“I want us, as a council, to support our 16 and 17 year olds for being able to cast a vote in elections. It’s no problem in Scotland.

“I think we are very much short-changing our 16 and 17 year olds by supporting it.”

“When you actually see some of the things that are done by 16 and 17 year olds, as reported in the press – local and national – it says that names haven’t been given for legal reasons.

“16 and 17 year olds, if they are given the right to vote, do they then assume the role of an adult?”

He added that councillors should not assume that giving young people the vote “will mean they will vote for you”.

Outlaw: “Political grandstanding”
Cllr Tig Outlaw (Con) said that he recognised many 16 and 17 year olds are knowledgeable and passionate about the world they live in. However, he shared concerns about the motion, saying,

“Since joining the council in May, I’ve seen motions brought before the council that have no real bearing on the operation of the Isle of Wight council and only seem to seek to make political statements that serve to gain some air in the local press.

“Even if felt that votes at 16 had some merit, this motion still simply is for me, political grand-standing and for that reason, I will voting against the amended motion.”

Hutchinson: Putting the decision with Parliament
Cllr Stuart Hutchinson (Con) explained his amendment “puts the decision where it should probably lie, which is that it should be considered by Parliament, and they will make the choice”.

He went on to explain that out of 190 countries in the World, nine have a voting age of 16.

Andre: Decisions made today affect young people’s future
Cllr Debbie Andre (Ind) argued that those 16 and 17 year olds that are not politically aware probably won’t vote, just in the same way as many over 18s who don’t either.

She went on to remind members that the decisions made today affect the youth’s future.

Love: “Positive message” about inclusion
Cllr Karl Love (Ind) explained that he was a youth and community officer on the Island for around five years. He told members that this vote was about sending a positive message to the Island’s young people and hope for the future.

With cuts to youth budgets, he believed this would send a really positive message to some (not all) young people about their inclusion.

Cllr Lora Peacey-Wilcox, explained that since taking up her position as Chairman of the Isle of Wight council, she was responsible for youth council members being able to sit inside the chamber during meetings.

Whittle: “Let children be children”
Cllr Wayne Whittle (Con) explained that he has worked since he was 15 and worked hard all his life to give his children their childhood.

“I’ll tell you, this is a very fast world today and a very fast-changing world, and you know to be a child is a luxury because we can sit here and debate and use children for our own political beliefs, but they should be allowed to remain children. We shouldn’t put pressure on children, that’s what I believe.”

“Many times it has been said about no tax without representation, well if you’re talking about income tax don’t forget that everybody has a tax free allowance of over £10,000, so I would be very surprised is there are any youngsters who are earning that much. OK, they are paying VAT on their crisps and cola.

“I asked my grandson who has just turned 16 about this and he replied that it would be OK for local elections, but I don’t know enough for national election.”

The vote
Members voted 32 in favour, three against (Cllrs Outlaw, Axford and one other Conservative) and one abstention (we missed who voted against and abstained, so if anyone is able to fill in the gaps please comment below).

“I am thrilled that the Isle of Wight Council has chosen to support Island Labour’s Votes at 16 motion – thanks must go to Cllr Geoff Brodie for proposing, and all that voted in favour.

“Labour are committed to this policy, young people are our future, and they deserve a vote.

“We now call on the Isle of Wight Council to lobby our MP, demanding he put our voice across in Parliament.”

Amended motion
Deputy leader, Cllr Hutchinson proposed the following amendment to the motion, which was accepted by Cllr Brodie.

Under ‘This Council believes’ the amended motion included

4. That there are a range of issues surrounding voting in the UK including the fact that 7.5 million citizens entitled to vote have not registered to do so, that there are inequalities in registration and turnout among several demographic groups and accepts that as recommended by the cross party Committee on Political and Constitutional Reform a review of voting processes and procedures should be fully considered by parliament, including the possibility of reducing the voting age.

Item 1 in ‘This Council resolves;” was substituted for:

“1. This Council resolves to support consideration by parliament of reducing the voting age.”

Image: dspender under CC BY 2.0

3 Comments on "Votes at 16: Find out what your Isle of Wight councillor said"

newest oldest most voted
I do not believe it

All very commendable I’m sure, but, witnessing daily some of the imbecile antics of a fair proportion in this age group, I’d be most reluctant to give them the responsibility of carrying a glass of water across the room without spilling it, let alone giving them the franchise.

Vote Up21-10Vote Down
willmatthews
Hi ‘I do not believe it’- Have you actually engaged with any 16/17 year olds or is this ‘imbecile antics’ a stereotype? Either way just have a look at one of the House of Commons debates from the UK Youth Parliament (you can find them on YouTube) – you can see how they are far better behaved than adult MPs. It’s also worth noting that the UK… Read more »
Vote Up9-11Vote Down
Nitonia

“Imbecile antics”? Are 16/17 the only age group that display this trait? A quick walk down Newport High ST late Friday or Saturday night would dispel this. As would a visit to IW Hunt Meeting or dare I say it as would taking a seat in the public gallery at a Full Council Meeting!